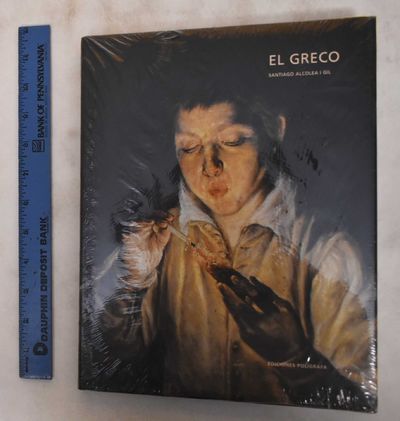 by Alcolea, Santiago
Barcelona, Spain: Ediciones Poligrafa, 2007. Hardcover. New/Sealed In Publisher's Wrap. light rubbing to lower corner where wrap has worn.. tan boards. 127 pgs w/ color & bw illustrations. pictorial black dustjacket. "Domenicos Theotokopoulos, better known as El Greco (1541-1621), gained his training as an artist in Crete, Venice and Rome, the three centers of art that he passed through. Yet even though he learned from the great Italian artists of the 16th century, his arrogance was such that he went so far so to say that Michelangelo was a good man but he did not know how to paint, remarking that the Last Judgment could be painted over and that he could be commissioned to re-do it with honesty and decency and no less quality in the painting. His contemporaries found him a difficult personality. In 1577, he moved to Spain and made his home in Toledo. In this lavishly illustrated volume, Professor Santiago Alcolea Gil describes the most notable aspects of the life and work of this artist, one of the true masters in European pictorial art."--Publisher's website. (Inventory #: 181402)
$40.00 add to cart or Buy Direct from Mullen Books
Share this item