From Pissarro to Picasso: Color Etching in France: Works from the Bibliotheque Nationale and the Zimmerli Art Museum 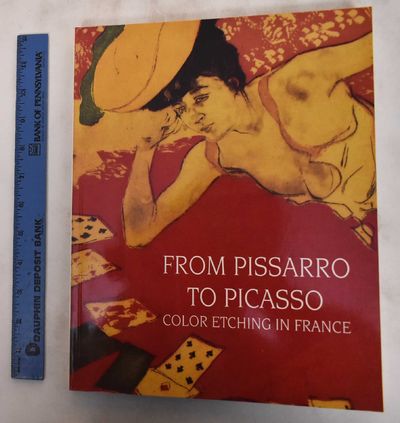 by Cat, Philip Dennnis and Marianne Grivel
New Brunswick, NJ / Paris: Zimmerli Art Museum / Flammarion, 1992. Softcover. VG (minimal shelf wear, small pencil mark on front page, all pages intact). White and color illustrated wraps with white lettering on cover and black lettering on spine, 198 pp., color illustrations throughout. Color etching flowered in France in the years 1885 to 1910, breaking the centuries-long tradition of artistic printmaking as an exclusively black and white medium. Its development was encouraged primarily by a renewed interest in eighteenth-century printmaking techniques and by the discovery of Japanese woodblock prints whose methods of composition and juxtaposition of unmixed areas of color demonstrated the dramatic and highly decorative effects that could be achieved by the superimposition of colored inked plates on a single sheet of paper. Although color etching began as an art form restricted to a small circle of artists working in Paris who were attracted to its intimacy and technical demands, its great aesthetic potential spawned a movement of considerable consequence by the turn of the century, especially for the circle of young, avant-garde artists including Jacques Villon, Joaquin Sunyer, Francis Jourdain, and Theophile Steinlen, who gathered around the master printmaker Eugene Delatre in Montmartre during the 1890s. By depicting life in the streets, cabarets and cafes of Paris, these artists fully exploited the creative possibilities of the color etching technique, producing subtly colored prints that were charged with atmosphere. Through a selection of works drawn from the collections in the Bibliotheque Nationale in Paris and the Zimmerli Art Museum at Rutgers University. Phillip Dennis Cate and Marianne Grivel explore the origin and expansion of color etching in France, tracing its development within the nineteenth-century renaissance of printmaking in France and analyze its aesthetic evolution in relation to major artistic movements such as Impressionism and Symbolism. Extensive artists' biographies and a complete list of the works of art illustrated make this an essential study for collectors, students, and for all those interested in late nineteenth-century French art. - website description. (Inventory #: 181368)
$30.00 add to cart or Buy Direct from Mullen Books
Share this item