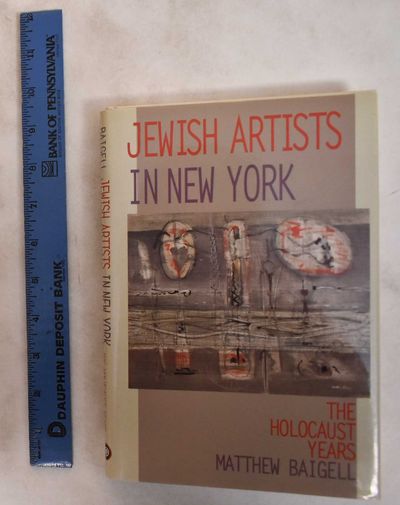 by Baigell, Matthew
New Brunswick, N.J.: Rutgers University Press, 2002. Hardcover. Like New. light shelf-wear to lower cover edges & corners. may have spot of soiling to cover (appears to be dried publisher's glue). tight binding; appear unread.. light tan boards w/ copper spine printing. book xv, 186 pgs w/ 47 bw plates. tan, grey illustrated dustjacket. Exploring the influence of the local cultural scene as well as events taking place in Europe, Matthew Baigell reexamines the work of Jewish artists inspired to respond to the murders of their fellow Jews during World War II." "Because there were only a few authentic instances of visual documentation of events until the war's later stages, artists both used traditional imagery and invented new kinds of imagery to record their responses to the catastrophe taking place. Unfortunately, New York City's Jewish intelligentsia seemed to offer little support, and art critics such as Clement Greenberg largely avoided the issue. Jewish artists were left to cope with the events of the war in isolation, without a collective visual memory to deal with the traumas presented by news reporters." "Artists featured include Marc Chagall, Jacques Lipchitz, Barnett Newman, Abraham Rattner, Mark Rothko, and Max Weber.--Jacket. (Inventory #: 181342)
$29.97 add to cart or Buy Direct from Mullen Books
Share this item