Giants in the Earth: A Saga of the Prairie 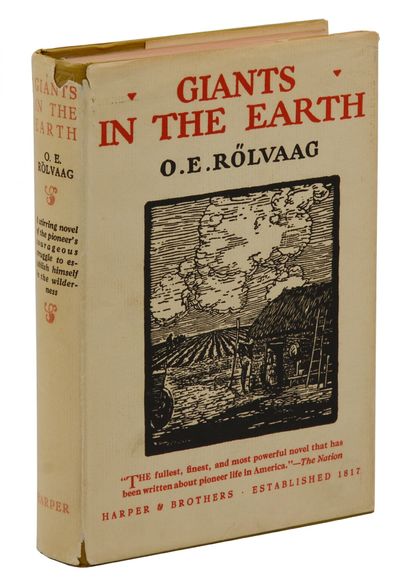 by Rolvaag, O.E.
New York: Harper & Brothers, Publishers, 1927. First American Edition. Near Fine/Very Good. First American edition. (Stated "First Edition" on copyright page with date code "C-B" corresponding to March 1927; most other copies appear to have "E-B," May 1927 date. Jacket appears to vary too with red on this copy's jacket, later examples likely dropped the red as publishers almost always get cheaper over time, not vice-versa.) xxii, 465, [1], [3, ads] pp. Publisher's olive cloth with gilt spine lettering, red topstain, pictorial endpapers. Near Fine with offsetting to endpapers, two very tiny stains to front board, in Very Good price-clipped dust jacket with chip and small tear at head, a smaller one at foot, but very bright and clean; paper used for this jacket may have been less pulpy than later issues. Former owner's wistful inscription on front flap margin, "Gerry French, March 26, 1957 in school in Larson's study hall thinking about my life in the future." An attractive copy of the Norwegian-American author's novel of pioneer life on the Dakota Territory, uncommon thus. (Inventory #: 140940799)
$600.00 add to cart Available from
Burnside Rare Books
Share this item
Burnside Rare Books
Offered by

The History of Philosophy

London : Printed for Humphrey Moseley and Thomas Dring , 1662
(click for more details about The History of Philosophy)

London : Robert Barker , 1612
(click for more details about The Holy Bible (King James Version) bound with The Book of Psalmes)
View all from this seller>