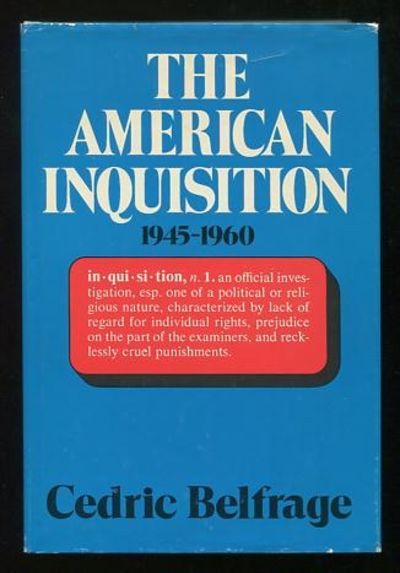 by Belfrage, Cedric
Indianapolis/New York: The Bobbs-Merrill Company, Inc.. Very Good+ in Very Good+ dj. (c.1973). First Edition. Hardcover. [light wear to cloth at extremities and bottom edges of covers, a couple of small brown spots (tea?) on top of text block; jacket shows moderate wear at edges and extremities]. INSCRIBED and SIGNED by the author on the front endpaper: "for Elena and Jack Baskin / with love in San Francisco / Cedric Belfrage / Nov 1973." The author's very personal recounting of the political climate in the U.S. during the decade and a half following World War II. As a long-time lefty (and editor since 1948 of the National Guardian, the story of which he told in a later book, "Something to Guard"), he was eventually deported in 1955 for his refusal to cooperate with HUAC and Sen. Joe McCarthy -- although, as he points out, the titular inquisition neither began nor ended with the witch-hunting career of the junior senator from Wisconsin, nor was it confined to such high-profile individuals as the Hollywood Ten, Linus Pauling, etc. "More than destroying lives it destroyed livelihoods, reputations and homes. Former Communists who repented and named names were more highly valued than people who refused to legitimize the inquisition by cooperating. The very possession of left-wing books was considered evidence of subversion. Thousands of ordinary people were victims. Besides the events surrounding the names of the Rosenbergs, Hiss and Larrimore, many less familiar names are cited here and their stories recounted." Especially interesting features in this book are the "Fever Charts," year-by-year juxtapositionings of various testimony excerpts, editorial comments, etc., which provide a vivid snapshot of the fear (and occasional absurdity) that characterized the period. And by the way -- don't make the mistake of thinking this couldn't happen again. Signed by Author . (Inventory #: 26317)
$25.00 add to cart Available from ReadInk
Share this item
ReadInk
Offered by