A Search for The Apex of America; High Mountain Climbing in Peru and Bolivia... 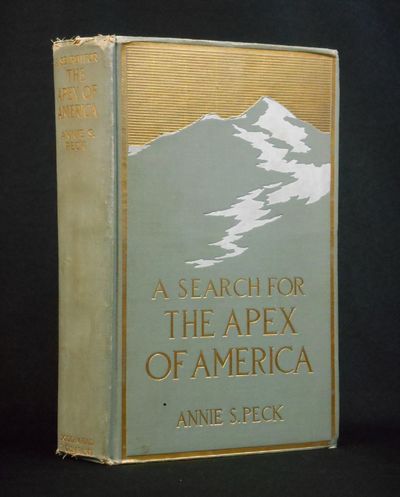 by Peck, Annie S.
New York: Dodd, Mead and Company, 1911. First Edition. Hardcover. Good +. First printing, octavo size, 390 pp. Annie Smith Peck (1850-1935) was a woman far ahead of her time; at a time when women were just beginning to be admitted to the halls of higher education, she not only earned a degree in classical languages in 1878 from the University of Michigan, but became the first woman to attend the American School of Classical Studies (in Athens, Greece) and, returning to the Univ. of Michigan, received a Master's Degree in 1881. Following her education she became one of the first American women college professors, teaching Latin at Purdue and Smith.

Climbing, however, became her passion at the relatively (for climbers) late age of 35. Upon seeing the Matterhorn during a train trip through the Swiss Alps she vowed to return and climb it - which she would do ten years later, becoming the third woman to summit the Matterhorn and the first to do so...wearing pants (at the time, women could be arrested for wearing "knickers" in public).

This book relates her adventures in pursuing a first ascent "of the tallest mountain in the Americas", which she believed was Mount Huascarán (Peru). She was successful at this in 1908 after several attempts, at the age of 58. She would continue climbing her entire life, with her last climb being at the age of 82. Not only was she a founding member of the American Alpine Club, but she was also a member of the Royal Geographical Society the Society of Women Geographers (the only two which would admit women at the time).

Whether or not one is a climber, her story is inspirational and this work, told in the first person and replete with black-and-white photographs, enables one to share in her adventure.

___DESCRIPTION: Bound in full light blue cloth over boards, outline of a mountaintop depicted on the front board by use of white fields of snow against a gilt sky background, gilt ruled border and lettering on the front, gilt lettering on the spine, frontis a reproduction of a black-and-white photograph of Annie Peck with her facsmilie signature beneath, a two-panel folding map facing p. 1, volume replete with illustrations (the list is four full pages long), bookseller's ticket on the rear pastedown from "Vernon Howard / Mountaineering Books / 700 Rolph Street, San Francisco"; octavo size (9" by 6"), pagination: [i-viii] ix-xx, 1-370.

___CONDITION: Better than good, the interior is clean and bright, and entirely free of prior owner markings; the boards mostly clean with a few stray spots of soil, the spine soiled with the lettering somewhat dulled, the corners gently bumped and showing light rubbing, the binding showing light wear including some tears to the cloth at the head and tail of the spine, a strong, square text block with solid hinges, the gutter between pp. 242 and 243 lightly cracked but the binding still strong.

___Swan's Fine Books is pleased to be a member of the ABAA, ILAB, and IOBA and we stand behind every book we sell. Please contact us with any questions you may have, we are here to help. (Inventory #: 20102101)
$440.00 add to cart or Buy Direct from
Swan's Fine Books
Share this item

We cheerfully accept returns for any reason within 30 days, so long as the book(s) is/are returned in the same condition as when sent. We will refund the price you paid for the book, plus shipping if the book was misdescribed.
More from this seller

A Survey of the Turkish Empire; In Which Are Considered..

London : Printed for T. Cadell, jun. and W. Davies.. , 1798
(click for more details about A Survey of the Turkish Empire; In Which Are Considered..)
View all from this seller>