STUMP SPEAKING. THIS PRINT FROM THE ORIGINAL PAINTING BY GEO. C. BINGHAM ESQ. IS RESPECTFULLY DEDICATED TO THE FRIENDS OF AMERICAN ART BY THE PUBLISHERS GOUPIL & CO 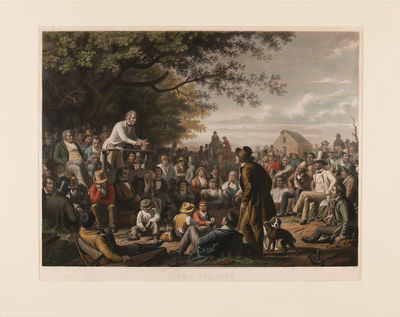 by [Bingham, George Caleb]
New York and Paris: Goupil & Co., 1856.. Handcolored aquatint line and mezzotint engraving, 28 1/4 x 36 inches, on thick paper. Noticeable chips at three corners, small gouge at top right corner (all outside the plate mark and none of these affecting the image). Minor mat burn from earlier matting. Very good. Matted. A vibrant and striking image of American campaign politics in the 1850s based on a painting by noted American artist George Caleb Bingham, featuring a white-suited politician leaning over a lectern and speaking to a large crowd of potential voters. George Caleb Bingham was born on a plantation in Virginia but grew up in Missouri, where he lived most of his life. He was largely a self-taught painter, but one with immense talents and instincts; creating - in addition to a steady output of dignified portraits - a series of genre paintings depicting, with a blend of grace and humor, the way of life of the people of the plains and the Missouri river. Bingham was himself a politician of some renown, with an interesting record of party hopping. Bingham served a term as a Missouri state Congressman for the Whig party beginning in 1848, sided with Lincoln and the Republicans during the Civil War, and then served as a delegate for the Democratic Party in 1872. At various times, he also served as Treasurer of Missouri, first chief of police in Kansas City, and the Adjutant-General of Missouri. Throughout his political career, Bingham also remained an artist, and left a catalogue of wonderful paintings, mostly concerned with frontier life along the Missouri River.

STUMP SPEAKING, painted in 1853-54, is the second of Bingham's election series crowd scenes, preceded by THE COUNTY ELECTION (painted in 1852) and followed by THE VERDICT OF THE PEOPLE (painted ca. 1854-55). These paintings, which are set in Bingham's home state of Missouri, reveal an artist concerned with the social nature of politics and elections in American life, and also the varying levels of commitment and attention these events evoke in the electorate. STUMP SPEAKING in particular contains the gamut of reactions by American voters to its central figure - a stumping politician at a lectern - as some people sit in rapt attention, others look up to the sky in obvious disinterest, while others are seen sleeping or lost in their own thoughts. The crowd is also composed of people from a wide range of social classes, from distinguished gentlemen to a comic figure in a tattered hat meant to represent the rural voter. An opposing candidate sits behind the speaker, taking notes; this man represents Bingham in self- portrait, waiting for his turn to speak.

Opposite the stumping politician sits a similarly white-suited gentleman with square jaw in a white top hat, sitting bolt upright; this man is meant to represent the Whig alternative to the prevailing politics of the Democratic Party. His clean, sober, unaffected aspect is meant to position Whig politicians literally as unbending, contrasting the speaker, who bends to the people. A young boy sitting at left-center, counting a few coins in his hand, is thought to represent the small businessman. Some of the figures in the engraving stand in for contemporary Missouri politicians, including ex-governor Meredith Marmaduke and the stump speaker himself, who is said to represent Erasmus Sappington, a sometime opponent of Bingham's in past Missouri elections.

By the 1850s, engraving and lithography brought scenes like Bingham's STUMP SPEAKING to a much wider, and more democratic audience. Bingham's paintings were now reproducible in large quantities, and the rising middle class was capable of buying pieces of visual art that had eluded them a generation earlier. The firm that produced the present engraving, Goupil & Co., was based in Paris, but opened a branch office in New York in 1848. The present engraving was executed by Gautier after Bingham's painting, and was one of the last productions of Goupil's New York office under Adolphe Goupil's supervision before he sold the branch to its manager, Michael Knoedler.

[Philadelphia : Printed by Lehman & Duval, published by the author , 1835-1836].
(click for more details about [THE ABORIGINAL PORT FOLIO])

London : John Murray , 1875.
(click for more details about THE HAWAIIAN ARCHIPELAGO. SIX MONTHS AMONG THE PALM GROVES, CORAL REEFS, & VOLCANOES OF THE SANDWICH ISLANDS)
View all from this seller>