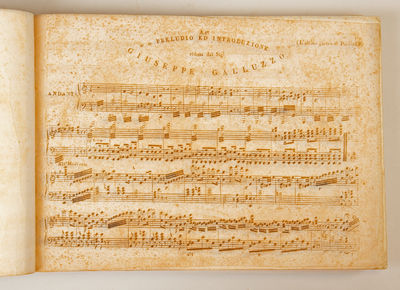 L'ultimo giorno di Pompei, an opera seria in two acts to a libretto by Andrea Leone Tottola, premiered in Naples at the Teatro San Carlo on 19 November 1825.

"L'ultimo giorno is typical of the Neapolitan machine operas of its time in incorporating a final cataclysm (like the one in Rossini's Mosè in Egitto). In his memoirs Pacini discussed innovations in his treatment of several cabalettas in the opera, and his formal experimentation is evident on a larger scale in the Act 1 ensemble 'Ecco la man di Astrea'. An unsuccessful effort at mounting the opera in Paris (1830) began a series of failures that affected Pacini profoundly and led eventually to his temporary withdrawal from the operatic scene in 1835." Scott L. Balthazar in Grove Dictionary of Opera. (Inventory #: 33475)
$250.00 add to cart or Buy Direct from
J. & J. Lubrano Music Antiquarians
Share this item