Let Truth be the Prejudice: W. Eugene Smith, His Life and Photographs 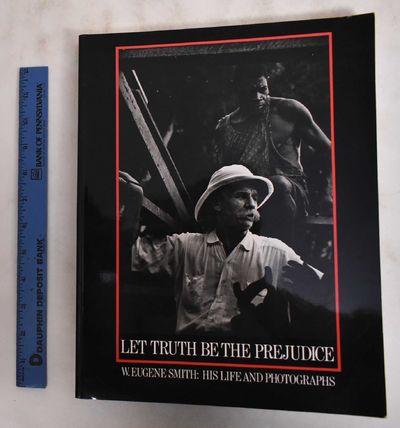 by Alfred Stieglitz Center. ; Philadelphia Museum of Art
New York City: Aperture : Viking Penguin [distributor], 1985. Softcover. VG/VG-, covers slightly worn, top front corner slight crease, Pages clean and tight. Pictorial glossy wraps; 240 pages : illustrations. "Let Truth Be The Prejudice documents the life and work of W. Eugene Smith, a man whose work expanded the range and depth of photography, bringing new aesthetic and moral power to the photo essay. Smith was born in 1918 in Wichita, Kansas, and raised according to traditional American values, believing in the nobility of America and the injustice of war. He began taking pictures with his mother's camera while still a boy and continued this practice throughout his schooling. In 1937 his burning ambition took him to New York City, where his rise as a professional photographer was meteoric."-- Amazon. Contents: The wounded angel : an illustrated biography / Ben Maddow -- World War II -- Postwar America -- Abroad -- After Life -- Japan. (Inventory #: 181456)
$45.00 add to cart or Buy Direct from Mullen Books
Share this item