Pennsylvania Clergyman William White Thanks Elbridge Gerry On Behalf Of The University Of Pennsylvania; Gerry Dockets It On The Verso 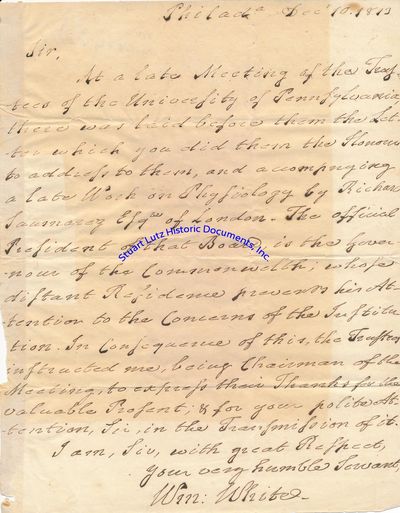 signed
by WILLIAM WHITE
WILLIAM WHITE (1748-1836). White was the Bishop of Pennsylvania and the Chaplain of the Senate. ALS. 1pg. December 10, 1813. Philadelphia. An autograph letter signed “Wm. White”. On behalf of the Trustees of the University of Pennsylvania, White wrote to Founding Father Elbridge Gerry (1744-1814), thanking him for donating a book to the university. “Sir, At a late Meeting of the Trustees of the University of Pennsylvania there was laid before them the letter which you did them the Honour to address to them, and accompanying a late Work on Physiology by Richard Saumarez Esq of London. The official President of that Board, is the Gouvernor of the Commonwealth; whose distant Residence presents his Attention to the Concerns of the Institution. In Consequence of this, the Trustees instructed me, being Chairman of the Meeting, to express their Thanks for the valuable Present; & for your polite Attention, Sir, in the Transmission of it. I am, Sir, with great Respect, Your very humble Servant, Wm. White”. Richard Saumarez (1764-1835) was a British surgeon. A docket in Elbridge Gerry’s handwriting is affixed to the verso; it was done on a separate slip of paper and glued to the White letter. The letter is in very good condition with toning throughout and remnants of an adhesive on the uneven right edge of the verso. (Inventory #: 5186)
$400.00 add to cart Available from
Stuart Lutz, Historic Documents, Inc.
Share this item