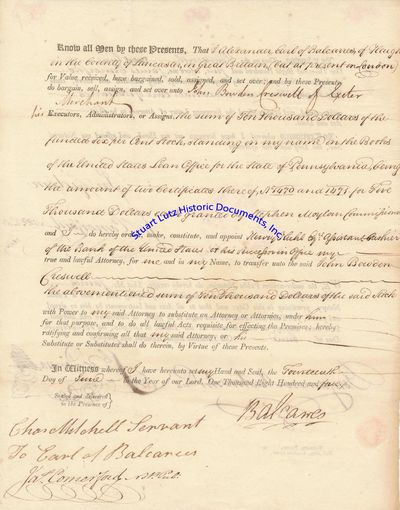 by EARL OF BALCARRES
ALEXANDER LINDSAY, 6TH EARL OF BALCARRES (1752-1825). Balcarres was a British nobleman and Army General. He fought for the British in the American Revolution. DS. 2pgs. June 14, 1804. [London]. A partly-printed document signed “Balcarres”. The Earl of Balcarres makes a financial transaction involving Pennsylvania bonds. This was something of a surprising choice for a British man who once fought against the United States during the Revolution. He made this transaction while living in London; having returned there after a stint as Governor of Jamaica. “Know all Men by these Presents, That I Alexander, Earl of Balcarres, of Haigh in the Count of Lancaster, in Great Britain (but at present in London) for Value, received, have bargained, sold, assigned, and set over; and by these Presents do bargain, sell, assign, and set over unto John Bowden Crewsell of Exeter Merchant his Executors, Administrators, or Assigns, the sum of Ten Thousand Dollars of the funded six per Cent stock, standing in my name in the Books of the United States Loan Office for the State of Pennsylvania, being the amount of two Certificates thereof, No. 1470 and 1475 for Five Thousand Dollars each granted by Stephen Moylan Commissioner and I do hereby ordain, make, constitute, and appoint Henry Thuhl by assistant cashier of the Bank of the United States or his Successor in Office my true and lawful Attorney, for me and in my Name, to transfer unto the said John Bowden Creswell the abovementioned sum of Ten Thousand Dollars of the said stock with Power to my said Attorney to substitute an Attorney or Attornies, under him for that purpose, and to do all lawful Acts requisite for effecting the Premises; hereby ratifying and confirming all that my said Attorney, or his Substitute or Substitutes shall do therein, by Virtue of these presents. In Witness whereof I have hereunto set my Hand and Seal, the Fourteenth Day of June in the Year of our Lord, One Thousand Eight Hundred and forty. Balcarres…”. The document is also signed by several witnesses on both recto and verso. The document is in very good condition with minor toning and residue from several wax seals. An interesting piece of financial history. (Inventory #: 5187)
$750.00 add to cart Available from
Stuart Lutz, Historic Documents, Inc.
Share this item