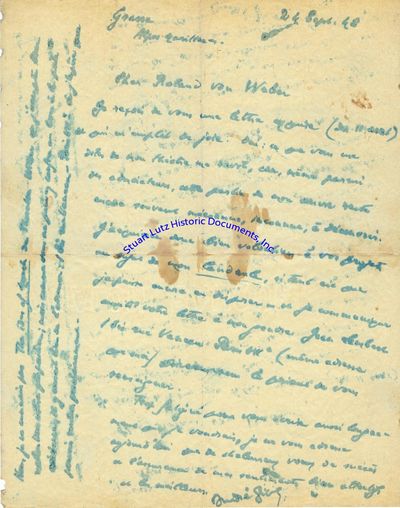 signed
by ANDRE GIDE
ANDRÉ GIDE (1869-1951). Gide was a Nobel Prize-winning French author. He is best known for his work concerning morality and the human condition. ALS. 1pg. September 24, 1948. Grasse, Alpes Maritimes, France. An autograph letter signed “André Gide”. Gide wrote, in French, to Roland von Weber concerning Gide’s play Le Roi Candule (King Candule). Gide wrote (in translation): “Dear Roland von Weber I receive from you a delightful letter (of August 11) and that fills me with joy. Yes, what you tell me of my theatre makes me smile, because even among admirers, this part of my oeuvre still remains often unrecognized, unknown, to discover. I therefore agree with pleasure to your projects on the subject of my Candaule if it is true that I can still arrange it, and I immediately pass on your letter to my son-in-law Jean Lambert Ibis Street Vaneau Paris (same address as me) – I ask him to inform you: Too tired to write you as long as I would like…Warm wishes of success and the assurance of my good sentiments…André Gide No, I don’t know The Ides of March of Thornton Wilder, and I accept with pleasure your suggestion…”. The letter is in very good condition with stains, and it written on thin onionskin paper. It includes a the original mailing envelope and a handwritten transcription of the French. (Inventory #: 5202)
$750.00 add to cart Available from
Stuart Lutz, Historic Documents, Inc.
Share this item