MR. WHITMAN: A STORY OF THE BRIGANDS 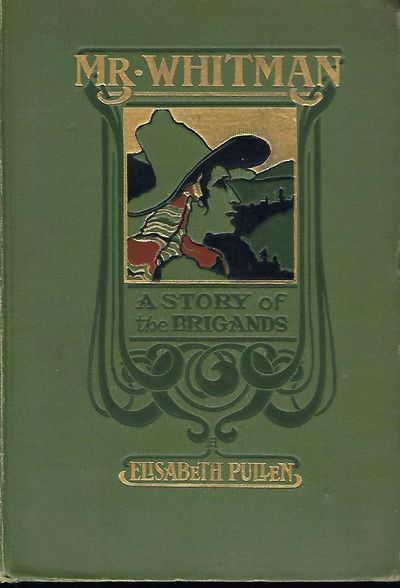 by PULLEN, Elisabeth
Boston: Lothrop Publishing Company, 1902. First Edition. Important signed presentation from Pullen on the front endpaper: "To Mr. E.C. Stedman with affectionate regard from Elizabeth Pullen. May twenty first, 1902." Also, with a two-page autographed letter signed from Pullen to Mrs. Stedman, tipped to a front blank page (folded and with a tiny hole to the first page), dated April 16, 1903: "My dear Mrs. Stedman- Stanley [her husband] is sending you this morning, with his affectionate compliments, his tickets to the Ladies' Day reception at the Players. We were not quite sure of your present address, so I have sent the cards to Mr. Stedman's care, at the Century Club, and I write to you at Bronxville, on the chance that you may be there, to tell of the whereabouts of those cards that await you. With very affectionate greetings from us both to the dear family of Stedman. Always cordially yours, Elisabeth Pullen." Mrs. Stedman has penned a note at the head of the letter: "Wrote a reply letter Apr. 21,'03 thanking Mrs. Pullen." With one of Stedman's satyr-themed bookplates on the front pastedown. The image from a variant bookplate used by Stedman has been the logo of Antic Hay Books for years. A very nice association copy! Edmund Clarence Stedman [1833 -1908) was an American poet, critic, essayist, banker and scientist. In 1904, he was one of the first seven people chosen for membership in the American Academy of Arts and Letters. In addition to his literary achievements, Stedman pursued scientific and technical endeavors. In 1879, he proposed a rigid airship inspired by the anatomy of a fish, with a metal framework and propellers. The airship never was built but its design foreshadowed that of the future dirigibles. His relationship with Pullen is well documented. Pullen [1849-1926] was an American author, journalist, and music critic. She began writing for the Portland, Maine papers and was so successful in this as to be encouraged to more ambitious efforts. A review of Stedman's "Victorian Poets" by Pullen won a flattering letter to the young journalist from the critic. Her invitation to join the Century Club received the endorsement of Stedman, among others. She married Stanley T. Pullen, a journalist and financier of Portland, Maine in 1894 after the death of her first husband, Nino Cavazza, in Italy. In "Mr. Whitman," an American business man in Italy is kidnapped by Brigands, refuses to pay a ransom, and then becomes the leader of his kidnappers. 12mo., pictorial green cloth, stamped in gilt, black & red; 352 pages. Very Good (covers bright with very minor wear; contents clean & tight with few small folds to lower corner of the half-title page). (Inventory #: 57265)
$150.00 add to cart or Buy Direct from Antic Hay Books
Share this item
Antic Hay Books
Offered by

DREAMS IN THE NOVELS OF GALDOS

NY : Hispanic Institute in the United States , 1960
(click for more details about DREAMS IN THE NOVELS OF GALDOS)

NY : Vantage Press , 1960
(click for more details about FALLS THE SHADOW)
View all from this seller>