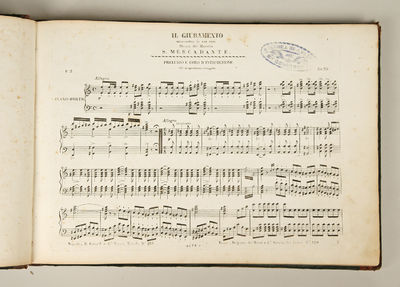 From the collection of Italian conductor, vocal coach, and close associate of Puccini and Mascagni, Luigi Ricci (1893-1981); previous owner's name ("Prof. Rigillo") and address to title; handstamp ("Scuola di canto del Mo. Lombardini") to title and many pages throughout.

Il giuramento, a melodramma in 3 acts to a libretto by Gaetano Rossi after Victor Hugo's Angelo (1835), premiered in Milan at La Scala on 11 March 1837.

Mercadante had a string of successes following his years of study in Paris. Beginning with Il giuramento, he gradually developed a more dramatic opera form that earned him the respect of contemporaries such as Liszt. (Inventory #: 33495)
$200.00 add to cart or Buy Direct from
J & J Lubrano Music Antiquarians
Share this item