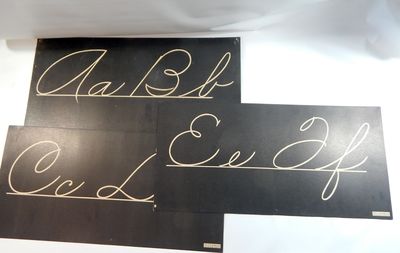 by Palmer Method of Handwriting
New York, et al.: Th A. N. Palmer Co, n.d.. Stiff card. Near fine. A complete set of fifteen cards, 8 by 17 inches, printed in black with letters and numbers in white showing the capital and lower case alphabet, numbers and symbols in the Palmer handwriting method.

These cards were generally posted around the classroom above the blackboards and were used to demonstrate the correct shaping of the letters in the style if writing now known as 'cursive'. The Paler method was generally taught in the second half of the twentieth century.

These cards show minimal wear and sunning, but they do have thumbtack holes on the upper corners where they were mounted. Complete sets of the classroom cards are scarce. A nice example of an earlier teaching method.
. (Inventory #: 21577)
$400.00 add to cart or Buy Direct from Thorn Books
Share this item

The Collected Works of Nikolay Gogol

New York : Alfred A. Knopf , 1923
(click for more details about The Collected Works of Nikolay Gogol)
View all from this seller>