Lattimore the scholar. With a preface by Gerald W. Johnson 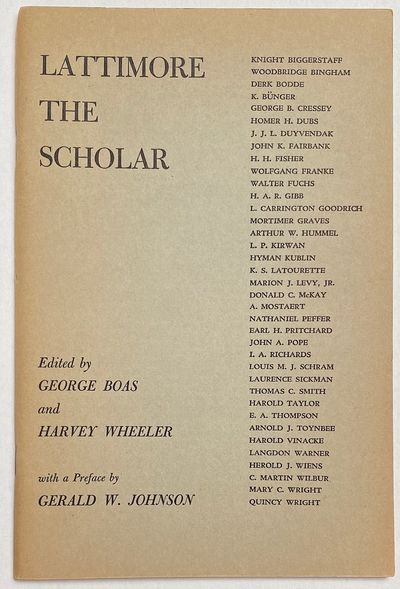 by Boas, George and Harvey Wheeler, eds
Baltimore, MD: Harvey Wheeler, 1953. Pamphlet. 61p., staplebound pamphlet, mild toning, otherwise very good. Defense of Owen Lattimore's scholarship, at a time of McCarthyite paranoia when he was being blamed for debacles in US policy in Asia and labeled a communist sympathizer. As the preface notes, the government could hardly blame him, as it had generally failed to take his advice. Contributors include such luminaries of Chinese studies as John King Fairbank, Knight Biggerstaff, Walter Fuchs, and many others. (Inventory #: 58900)
$15.00 add to cart or Buy Direct from Bolerium Books
Share this item

The Mandarin way; as told to Allan Carr, revised and expanded

San Francisco : California Living Books , 1980
(click for more details about The Mandarin way; as told to Allan Carr, revised and expanded)
View all from this seller>