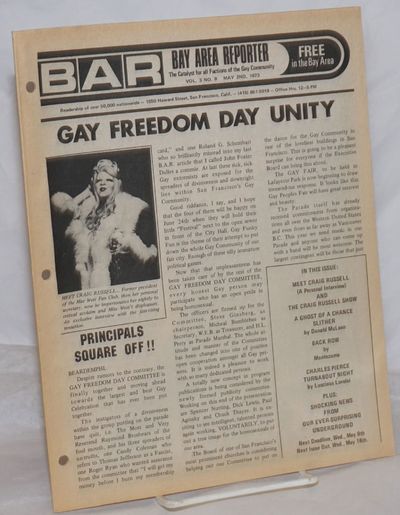 by Bentley, Paul & Bob Ross, editors and publishers, Craig Russell, Donald McLean, Luscious Lorelei et al.
San Francisco: Benro Enterprises, 1973. Newspaper. [32p] 8.25x10.75 inches, articles, reviews, interviews, event listings, local gay business ads, 3-hole punch for binding and mild toning else very good magazine-style newspaper on pastebound newsprint. Cover story on the upcoming first official Gay Freedom Day which eventually became the Gay Pride Parade. In 1970 and 1972 there had been two small celebrations, unofficial and not very well organized or attended. This would be the first to draw over 40,000 people. At this time the Reporter was campier and focused on fun and entertainment. Eventually it would become a serious journalistic and political force. (Inventory #: 259243)
$15.00 add to cart or Buy Direct from Bolerium Books
Share this item