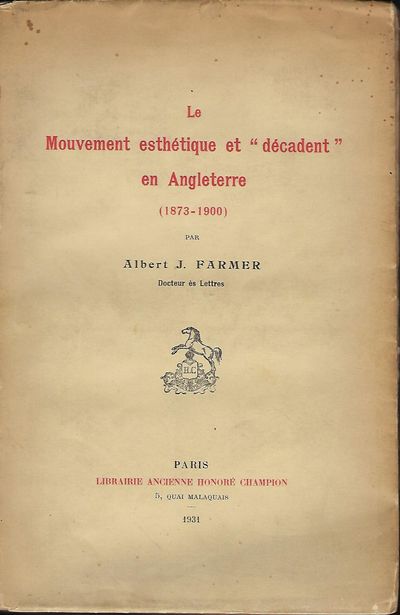 by FARMER, Albert J.
Paris: Librarie Ancienne Honore Champion, 1931. First Edition. Signed presentation from Farmer on the front endpaper: "To Professor J.S. Harrison, A friendly token in appreciation of much kindness. Albert J. Farmer." An exhaustive study of English decadent literature between 1873-1900. The Decadent movement was a late 19th century artistic and literary movement, centered in Western Europe, that followed an aesthetic ideology of excess and artificiality. The movement was characterized by self-disgust, sickness at the world, general skepticism, delight in perversion, and employment of crude humor and a belief in the superiority of human creativity over logic and the natural world. Central to the decadent movement was the view that art is totally opposed to nature in the sense both of biological nature and of the standard, or natural, norms of morality and sexual behavior. Leading figures in Britain associated with decadence were Oscar Wilde, Algernon Charles Swinburne, and illustrator Audrey Beardsley, and writers associated with The Yellow Book. Harrison is noted for one of his writings in a footnote on page 50. Small quarto: printed wraps with fold-under flaps; 413 pages, includes bibliography. Text in French.. Very Good (little wear covers with some tanning covers; contents clean & tight). (Inventory #: 57269)
$125.00 add to cart or Buy Direct from Antic Hay Books
Share this item
Antic Hay Books
Offered by