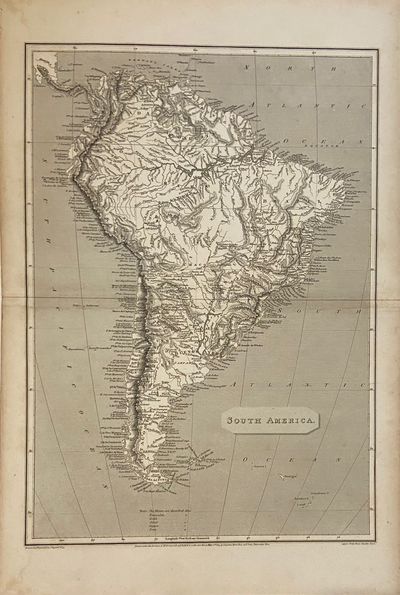 by ARROWSMITH, Aaron
London: Longman, Hurst, Rees & Orne, 1809. unbound. John Russell. Map. Original uncolored engraving. Image measures 14 1/4" x 10 1/4". Sheet measures 17 1/8" x 11 1/2" This elegant 1809 map of South America depicts parts of Central America, the Leeward Islands, and extends southwards to Patagonia and including Falkland and Sandwich Islands. The map also notes the nonexistent "Aurora islands", a group of three phantom islands reportedly sighted by Spanish merchants in the 18th and 19th centuries. The continent is labeled in great detail, showing cities, isles, bodies of water, mountain ranges and coastal features. The map is in very good condition, with minor toning to margins. Aaron Arrowsmith (1750- 1823) was from a family of London based cartographers and publishers. Trained under John Cary and William Faden, he was given the title of "Hydrographer to the Prince of Wales" in 1810 and "Hydrographer to the King" in 1820. The family business was taken over by his sons, and eventually by his nephew, John Arrowsmith, who was a founding member of the Royal Geographical Society. (Inventory #: 298533)
$135.00 add to cart or Buy Direct from
Argosy Book Store
Share this item