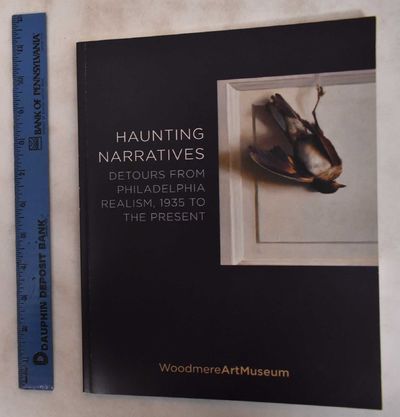 by Palczynski, Matthew
Philadelphia, PA: Woodmere Art Museum, 2012. Softcover. VG (minimal shelf wear, may show some rubbing at corners and on cover, all pages clear and intact). Purple and color illustrated wraps with white and gold lettering, 48 pp., color illustrations throughout. "American art in general - and Philadephia's art in particular - has been characterized by narrative painting and various stripes of realism. The tradition reaches back to the colonial era and the work of limners who invested their images with deep meanings that underlay their highly detailed surface. Unique configurations of realism - defined broadly here as art grounded in varying degrees of mimetic precision in the representation of people, places, and things - run through the art of Philadelphia in the work of some of its finest practitioners, from Charles Willson Peale and Thomas Eakins in the nineteenth century, to Robert Henri and his circle in the early twentieth century. This realist impulse continues to be embraced by artists working in the city today. This exhibition grew largely out of a need to delve deeper into Woodmere's collection and to place on view rarely seen works of art. It also surveys particular configurations of narrative realism in Phildelphia that seem like modernist or contemporary 'detours' from the mainstream, 'haunted' and set in a minor key, with undercurrents and overtones that probe veiled relationships, histories, and contexts particular to the twentieth and early twenty-first centuries. The exhibition extends back to the 1930s and is organized into five thematic sections: still life, nature and architecture, the romanticism of water, the idealized figure, and identity." - quoted from introduction. (Inventory #: 181497)
$30.00 add to cart or Buy Direct from Mullen Books
Share this item