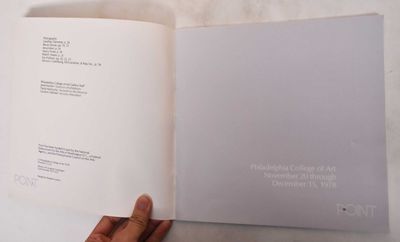 by Philadelphia College of Art
Philadelphia, PA: Philadelphia College of Art, 1978. Softcover. G+ (minimal shelf wear, some spotting and age-toning on cover). White wraps with gray lettering, 32 pp., bw illustrations. "The title of his exhibition was inspired by Kandinsky's treatise, Point and Line to Plane, begun in 1914 and published in 1928. He described the point as 'the result of the initial collision of the tool with the material plane,' or as the 'innermost concise form.' As the 'proto-element of painting' it becomes a vehicle for the spiritual as well as the material, the burdens Kandinsky laid on his painting. For Paul Klee, the point is a metaphor for 'I,' or self, and for the genesis of life and form. Klee's and Kandinsky's examination of the dot was incorporated into many of their classes at the Bauhaus. Compulsory basic design courses featured a first semester course taught by Joseph Albers, which included a workshop experiment on the use of material with respect to point. Unlike the pointillists, the artists in this exhibition possess only the tenuous affinity of having explored the dot within the same two decades. This exhibition, therefore, marks the first time their work is seen together. For many of them the point or dot has been a central issue in their work. Some have already abandoned it; others continue to investigate its possibilities."- quote from introduction. (Inventory #: 181502)
$45.00 add to cart or Buy Direct from Mullen Books
Share this item