The North Pole aftermath: speech of Hon. D.S. Fess, of Ohio, in the House of Representatives, Congress of the United States, Thursday, March 4, 1915 [drop title] 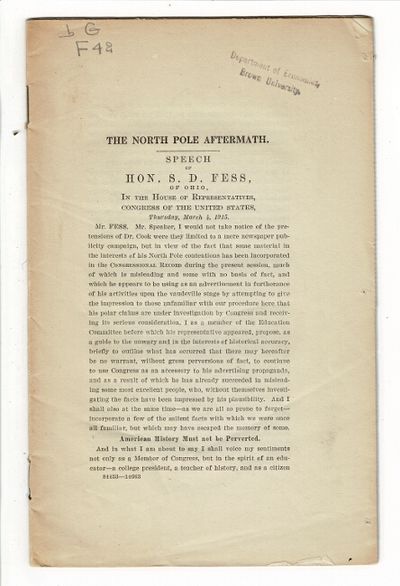 by Fess, S. D., Hon
[Washington, D. C.: publisher not identified, 1915. 8vo, pp. 27, [5]; self-wrappers, saddle-stitched; old Brown University rubberstamp at the top of the first leaf, accession numbers in pencil; all else very good. Uncommon: only 7 in OCLC: University of Alberta, Royal Danish Library, Smithsonian, Oberlin, Dartmouth, the U.S. Navy and National Geographic Society. Regarding the accounts of Robert Peary and Frederick Cook and their respective claims of having reached the North Pole. Fess supports Robert E. Peary's claim to discovery of the North Pole and declares similar claim by Frederick A. Cook to be fraudulent. He also states that U.S. Congress does not support Cook. (Inventory #: 57835)
$40.25 add to cart or Buy Direct from
rulon-miller books
Share this item

Occasionally. A magazine about Bob Dylan. Nos. 1-5 [all published]

Pattingham, Wolverhampton, U.K. : [publisher not identified] , 1986
(click for more details about Occasionally. A magazine about Bob Dylan. Nos. 1-5 [all published])
View all from this seller>