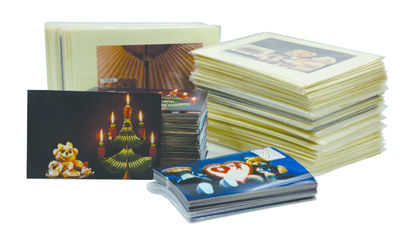 by Alten, Gloria
[Lake Oswego, Oregon]: [Gloria Alten], 1983. Unbound. Four linear inches of loose 4"x6" drugstore prints intended by the artist to make blank greeting cards with; some duplicates and many are near-duplicates-original photographs repetitively taken of the same scene but slightly different. [With] 100 completed greeting cards: 7.5"x5.5"folded sheets with original photograph pasted on front, most hand-titled and/or signed by the artist; with blank envelope in plastic sleeve. [With] Three Polaroid images.

Portland-area artist Gloria Alten (1923-2014) created a line of greeting cards she illustrated by photographing scenes with stuffed bears, for what appears to be her long-running project entitled "Glances." Here, her process is somewhat visible; with the finished product presented alongside the rejected pictures one can begin to notice the difference between nearly identical shots. A slightly different lighting pattern on a scene can change the mood completely.

Many scenes were arranged by month-February is Valentine's Day, April is tax time, and so on. Often a bear is seen wearing an "I Love Oregon" shirt and occasionally there is a Portland-area theme. Overall, an odd collection of images in which the photographer seems to approach with certain earnestness. For example, a scene for February, 1984 includes a copy of George Orwell's Nineteen Eighty-Four. A book so over-used as shorthand for dystopia is here placed next to a smiling stuffed bear without the slightest hint of irony, as if Alten is happily enjoying the coincidence. . (Inventory #: 140940842)
$500.00 add to cart or Buy Direct from
Burnside Rare Books
Share this item
Burnside Rare Books
Offered by

Philadelphia and London : George W. Jacobs & Company , 1907
(click for more details about Frederick Douglass)
View all from this seller>