Return of Sherlock Holmes, The 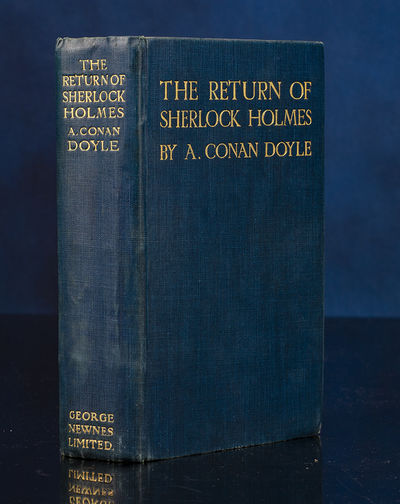 first edition
by DOYLE, Arthur Conan; PAGET, Sidney, illustrator
London: George Newnes, 1905. ‘Holmes!' I cried. ‘Is it really you? Can it indeed be that you are alive?
Is it possible that you succeeded in climbing out of that awful abyss?'"

First English edition of the third collection of Sherlock Holmes stories (preceded by the first American edition by about one month).

Publisher's dark blue cloth lettered in gilt on front cover and spine. Early ink signature "Mary V.B.M." and bookplate of Barry Cross of Bishop's Waltham (UK) on front free endpaper. An excellent copy, with the gilt much brighter than is usually seen.

"The author was persuaded to revive Sherlock Holmes by the generous offers made by the proprietors of the American magazine...Having decided to write a new series, the author took care to preserve the integrity of his fictional character. ‘I would not write a Holmes story without a worthy plot, without a problem which interested my own mind, for that is a requisite before you can interest any one else.' The main problem was the plot...The plots did come and thirteen stories were written, among them some of the most interesting in the whole series" (Green and Gibson, pp. 140-141).