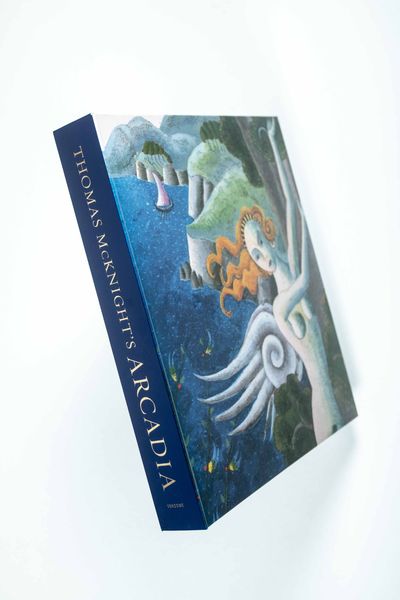 by McKnight, Thomas; Frencesco Colonna (text)
New York: Vendome Press, 2006. Limited Edition. Hardcover. Fine condition. Signed by the artist on limitation page. 1/600. Large Quarto. Unpaginated. Original navy blue cloth, foil stamped, with a debossed plate on the front cover, and slipcased in a lidded box, gilt lettering on spine. Orange endpapers. Illustrated title page printed with black and orange lettering. "Best known for his celestial interiors and landscapes of the world's most beautiful places, Thomas McKnight has also been concerned with an interior world he calls Arcadia-a place where nymphs linger by ancient springs, oracles speak, and angels appear. In the past decade, in a burst of creativity, McKnight has developed a new style to best depict these interior visions. A selection of over one hundred of the new paintings has been made for this handsome new monograph." (Publisher). A beautiful publication in near fine condition, small nick at foredge of lid and box, removed from the original shrinkwrap only to verify the signature. (Inventory #: 47946)
$125.00 add to cart or Buy Direct from
Eric Chaim Kline Bookseller
Share this item

De Accentibus, et orthographia, linguae Hebraicae... libri tres [THREE BOOKS on the ACCENTS and ORTHOGRAPHY of the HEBREW LANGUAGE: THE EARLIEST SUCH PRINTED TREATISE by a CHRISTIAN SCHOLAR - COPY from the JUEDISH-THEOLOGISCHES SEMINAR IN BRESLAU]

Hagenau : Thomas Anshelm , 1518
(click for more details about De Accentibus, et orthographia, linguae Hebraicae... libri tres [THREE BOOKS on the ACCENTS and ORTHOGRAPHY of the HEBREW LANGUAGE: THE EARLIEST SUCH PRINTED TREATISE by a CHRISTIAN SCHOLAR - COPY from the JUEDISH-THEOLOGISCHES SEMINAR IN BRESLAU])