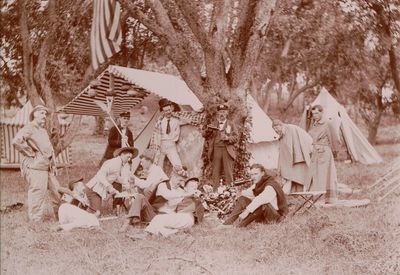 The American Canoe Association was founded in 1880 by 15 avid canoeists. Today, the organization boasts over 30,000 members and this photo album documents its fifth-ever general meet (and its 14th overall) held along the Hudson River.

Canoeists made camp at Croton Point on its northwestern side facing Haverstraw Bay, from July 13 to July 28, 1894. A number of newspapers reported on the event with headlines such as "Preparations made . . . in a blaze of sun and glory-Dainty crafts that will speed over the rippling courses on the Hudson." Participants competed in 20 events, and, as this album and contemporary news accounts show, had a hell of a good time. In previous meets, those who didn't want to cook for themselves could join a mess, but this year, according to one report, "each club hired a colored cook, who mixed the ingredients of indigestion"--one of these cooks can be seen in a group shot blowing a horn. Another great camp shot shows a group of men around a pile of bottles (which we assume used to contain alcohol) all hamming for the camera: one is playing a guitar, another is forcing a man to drink, one is pouring himself a drink, and two men lurk at the side, dressed as Sherlock Holmes. Although women stayed at a separate camp (apparently one of them broke through and was taught how to canoe) they are shown in several group shots.

Several images taken on the water including a race with sails, one shows the beach with canoes strewn about, another looks at the beach from a distance. There's also a great shot of the Knickerbocker Canoe Club and the Ianthe Canoe Club of Newark's tent compound. Two photos show the firing of the camp cannon; one up close, the other from a distance shows a just-fired canon beneath two flag poles with six club flags. The formal opening of the camp was delayed until July 14th because they had neither the canon ammunition, nor all the club flags. Each club had its own particular flag and totem and a group shot in front of the headquarters shows men wearing club sweaters with the totems: one a bat, another a sea horse (likely the Knickerbocker Club of New York), and two with a left point arrow inside a left-pointing flag.

Outstanding, and possibly the only surviving, images of an important event at the dawn of organized canoeing.

This item is offered by Langdon Manor Books, LLC, antiquarian booksellers. Please do not hesitate to contact us for additional information and/or photos and we will respond promptly. We package our items carefully, ship daily, and have a no hassle returns policy--your satisfaction is guaranteed. We are members of the Antiquarian Booksellers' Association of America (ABAA), the International League of Antiquarian Booksllers (ILAB) and the Independent Online Booksellers Association (IOBA) and adhere to their rules of ethics. (Inventory #: 1407)
$2,000.00 add to cart or Buy Direct from
Langdon Manor Books
Share this item

There are things to do

Clayton, Georgia : South Today , [South Today]
(click for more details about There are things to do)
View all from this seller>