An Essay on Military Law, And the Practice of Courts Martial. 1st ed 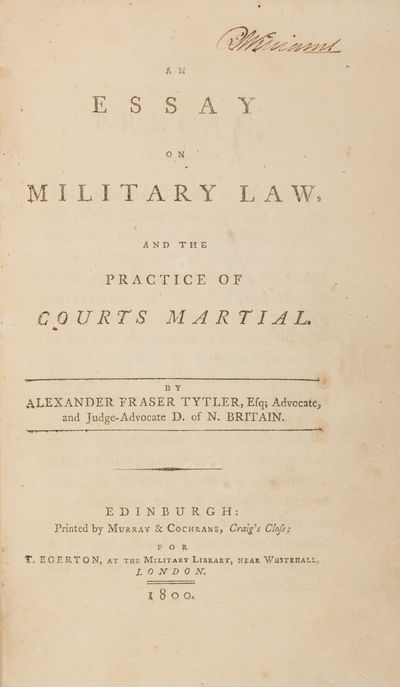 by Woodhouselee, Alexander Fraser Tytler, Lord
1800. Edinburgh: Printed by Murray & Cochrane, 1800. 1st. Edinburgh: Printed by Murray & Cochrane, 1800. 1st. First Edition of an Important Treatise on Military Law Woodhouselee, Alexander Fraser Tytler, Lord [1747-1813]. An Essay on Military Law, And the Practice of Courts Martial. Edinburgh: Printed by Murray & Cochrane, Craig's Close; For T. Egerton, at the Military Library, Near Whitehall, London, 1800. [iii], vi-xi, [3], 428 pp. Octavo (8-1/4" x 5-1/4"). Contemporary three-quarter calf over marbled boards, gilt-edged raised bands, gilt ornaments and lettering piece to spine. Light rubbing to boards, moderate rubbing to extremities, chipping to head of spine and lettering piece, gilding mostly rubbed away from spine, joints starting at head, corners bumped and somewhat worn, front hinge cracked, rear hinge starting. Moderate toning, light foxing in a few places, a few upper corners dog-eared. Early owner signature to head of title page, later owner stamp (of "T.Y. Field U.S.M.C") to front free endpaper and p.287, early marks and underlining in pencil to a passages. $1,500. * First edition. In addition to his legal career Tytler, later Lord Woodhouselee, was a highly respected teacher and polymath. "The following Treatise is the joint result of the Author's reading, and enquiry into every source of information, relative to the Military Law of the country, and of his professional experience in the Forms and Practice of General Courts-Martial, during a period of several years, in which he has had the honour of holding his Majesty's commission of Judge-Advocate for this part of the United Kingdom" (Preface). An important and well-received treatise, it went through fifteen editions and issues between 1800 and 1814. (A laid-in note in our copy identifies the former owner of our copy as Lieutenant Colonel Thomas Y. Field, U.S.M.C.) English Short-Title Catalogue T130384. (Inventory #: 71522)
$1,500.00 add to cart or Buy Direct from
Lawbook Exchange
Share this item

by Hughes, William, Of Gray's Inn

The Trial of Elizabeth Duchess Dowager of Kingston for Bigamy, 1776

1776
(click for more details about The Trial of Elizabeth Duchess Dowager of Kingston for Bigamy, 1776)
View all from this seller>