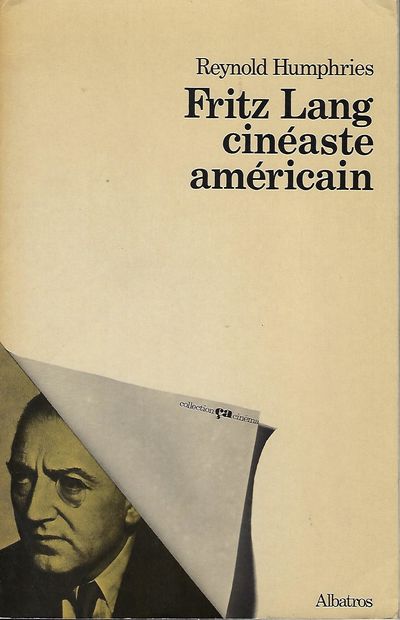 by HUMPHRIES, Reynold
Paris: Editions Albatros, 1982. First Edition. Signed inscription from Humphreys on the front endpaper: "With the compliments of the author. Reynold Humphries. Paris, October, 1982." The inscription is to University of Southern California Professor Ronald Gottesman, who specialized in the American novelist Upton Sinclair, film studies including the work of Orson Welles and movie depictions of King Kong. One page, written on both sides. "Pantin, 26 October 1982. Dear Ronald Gottesman, Summer 1980, at a time when I was contemplating bringing out articles based on my thesis, Dudley Andrew mentioned you and QRFS. The articles have turned out to be a book which I am sending to you in the hope you'll find it of interest. Should you write anything on my book, I'd be most grateful if you would send me a copy of the review article. I hope to hear from you in due course. Yours sincerely, Reynold Humphries." The reason Humphrey sent him this French edition is because it is the true first edition and the American (English translated) edition did not come out until 1988, published by Johns Hopkins University Press. Humphreys was a professor at the University of Lille in France. Gottesman founded the journal Quarterly Review of Film Studies [QRFS] in 1976. Its name was changed to Quarterly Review of Film and Video in 1989. James Dudley Andrew is an American film theorist and is the Selden Rose Professor of Film and Comparative Literature at Yale University. Books signed by Humphries are uncommon!. Small quarto: pictorial white wraps; 202 pages. Illustrated.. Very Good (little wear covers; contents clean & tight). (Inventory #: 57291)
$125.00 add to cart or Buy Direct from Antic Hay Books
Share this item
Antic Hay Books
Offered by