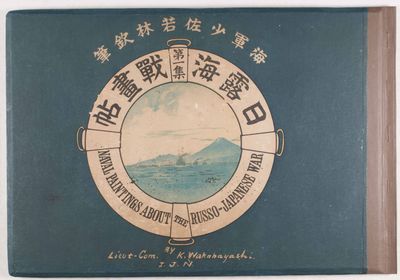 by 若林 欽 (Kin Wakabayashi)
東京 (Tokyo): 春陽堂 (Shunyo-do), 1906. First edition. Hardcover. vg to vg+. Oblong quarto. Unpaginated. Brown buckram over blue and white illustrated paper boards, with blue and white lettering on the front cover. Beveled edges. Binding has been professionally reinforced and repaired, with new modern endpapers. A beautifully produced work illustrated throughout with a total of 12 full page chromolithographs after original paintings by Lieutenant Commander Kin Wakabayshi, of the 16th torpedo-boat division, flagship Shirataka. The Lieutenant Commander and his ship took part in the infamous Siege of Port Arthur, 1904-1905 (and the Battle of the Yellow Sea) during the Russo-Japanese War, and the images and first person account depictic these events. The images are dramatic and evoke the kinetic energy of the battle with the movement of ships and explosions in the water depicted in detail. Each of the images are protected with a captioned tissue guard, which contains descriptive text printed in English and Japanese.

Text in Japanese and English.

Binding with some minor age toning, small stains and scratches/abrasions to the covers. Interior with a small tear to the upper left corner of the opening calligraphic leaf. Images overall in pretty good condition, except for the occasional light smudges or crease. Some creasing to some of the tissue guards. Binding in very good+, interior in very good condition overall. Extremely scarce. Cover protected with modern mylar. Alternate title: 日露海戦画帖

De Accentibus, et orthographia, linguae Hebraicae... libri tres [THREE BOOKS on the ACCENTS and ORTHOGRAPHY of the HEBREW LANGUAGE: THE EARLIEST SUCH PRINTED TREATISE by a CHRISTIAN SCHOLAR - COPY from the JUEDISH-THEOLOGISCHES SEMINAR IN BRESLAU]

Hagenau : Thomas Anshelm , 1518
(click for more details about De Accentibus, et orthographia, linguae Hebraicae... libri tres [THREE BOOKS on the ACCENTS and ORTHOGRAPHY of the HEBREW LANGUAGE: THE EARLIEST SUCH PRINTED TREATISE by a CHRISTIAN SCHOLAR - COPY from the JUEDISH-THEOLOGISCHES SEMINAR IN BRESLAU])