Come i falchi. Scene drammatiche in due atti 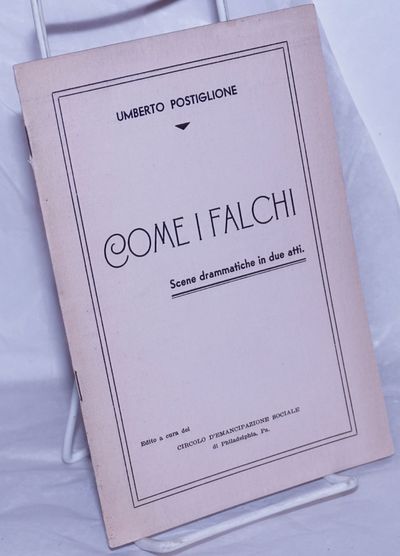 by Postiglione, Umberto
Philadelphia: Circolo d'Emancipazione sociale, 1939. Pamphlet. 22p., staplebound pamphlet, mild corner wear and handling soil, staples rusted, large stain and light foxing on rear wrap else very good condition. This work also appeared from the same publisher with an orange cover. "Like the hawks," a two-act play about the exploitation of mine workers. Postiglione, who died in 1924, had been an active contributor to Luigi Galleani's "Cronaca Sovversiva" under a host of pseudonyms. (Inventory #: 260300)
$175.00 add to cart or Buy Direct from Bolerium Books
Share this item