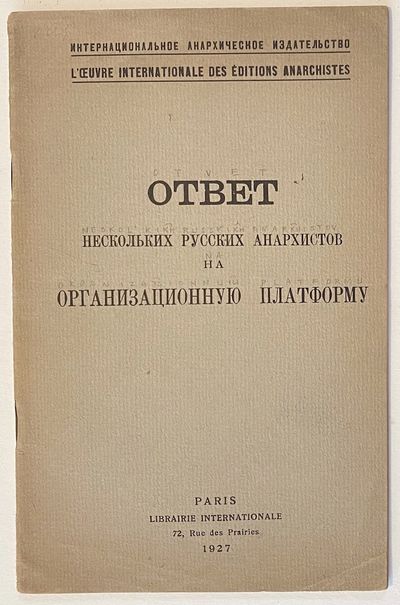 Paris: Libraire Internationale, 1927. 39p., staplebound pamphlet, some toning, cover title has transliteration in tiny penciled letters, otherwise very good. Text in Russian. Signatories listed at the end as Sobol, Schwartz, Steimer, Volin, Lia, Roman, Ervantian, and Fleshin. L'œuvre internationale des éditions anarchistes. One of the pamphlets issued in response to the 1926 "Organizational Platform of the General Union of Anarchists," a controversial proposal from the Group of Russian Anarchists Abroad. The Platformists, including Nestor Makhno, called for a degree of organization in the international anarchist movement that they believed would give it greater resilience, taking lessons from the defeat of anarchists by the Bolsheviks after the Russian Revolution. Critics, including the Russian authors of this piece, believed that this level of organized federation would be a betrayal of anarchist ideals. (Inventory #: 260182)
$200.00 add to cart or Buy Direct from Bolerium Books
Share this item

The necessity for a struggle to abolish colonialism: a paper given by Anna Melissa Graves at the Rassemblement Contre La Guerre Et La Militarisme (an International Congress Against War and Militarism) held in Paris - August 1937

Bronx : J.H. Velazquez , 1953
(click for more details about The necessity for a struggle to abolish colonialism: a paper given by Anna Melissa Graves at the Rassemblement Contre La Guerre Et La Militarisme (an International Congress Against War and Militarism) held in Paris - August 1937)