Collection of Photographs of Tennessee Williams 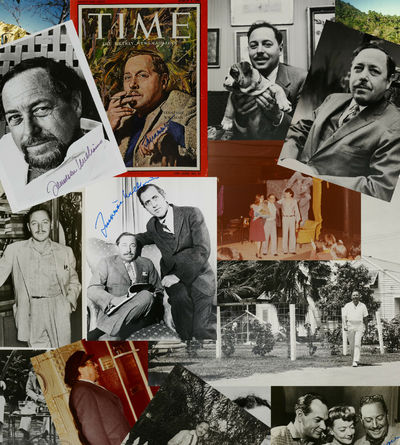 by [Williams, Tennessee]
[No Place]: [No Publisher], 1990. Near Fine. A three-ring binder of photographs of Tennessee Williams and people and places related to his work, compiled by fan Jackie Koenig over many years. The majority, 40 to be exact, are publicity photos of Williams himself; four of these are signed by Williams. These show Williams on TV programs, at Key West (taken by Don Pinder), at his library in 1955, at the Showcase Theatre in San Francisco in 1976 (taken by Jere Hageman, by her on their versos), and at play openings. Koening has provided occasional contextual details on laid in slips, such as "I attended this preview, and Tennessee Williams sat behind me."

A copy of the March 9, 1962 issue of Time magazine is included. It features a portrait of Williams on the cover and is also signed. Some photos related to Williams' work are included, such as signed photos of actors in productions of his work like Burl Ives and Ben Cooper. A set of 11 original color photos by Emily Roseland from 1997 capture the Puerto Vallarta set of Night of the Iguana.