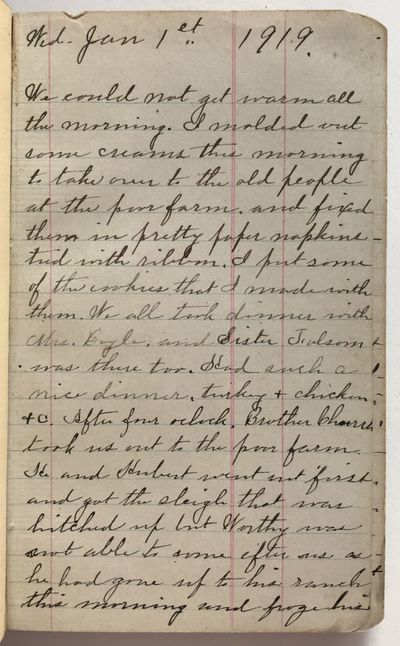 by Raymond, Dilla Annazillah Jackson
Durango, Co, 1919. Very good.. [188]pp., approximately 24,000 words. Small octavo journal, original black pebbled cloth. Light wear at edges and spine ends; hinges a bit loose. Accomplished in a neat, legible hand. Light tanning. An extensive diary for 1919 kept by widow Dilla Raymond of Durango, Colorado, where she lived with her two children and was very involved with her church, likely Baptist, and the Women's Christian Temperance Union. Dilla (1862-1950) moved with her family to Colorado in the 1870s, where her parents seem to have owned a ranch. The sale of both an "upper" and "lower" ranch is discussed in the diary. She was married to George Nelson Raymond (1859-1918), who owned the Durango Herald with his brother, Sol, which they operated until 1916. George had previously owned the Animas Forks Pioneer newspaper and served as Durango's postmaster in 1903. The couple had two children, Gertrude (1889-1988) and Hubert (1900-1972), who both appear in the diary. A niece, Catherine (1892-1963), also lived with them.

About 4,000 people lived in Durango in 1919, with numerous ranchers and cattlemen in the area. Dilla writes here about handling the sales of her ranches, possibly family properties. On May 19, she writes, "Went to town to get the ranch matters all settled...got $5,000 down, with notes for the remaining $3,000. Paid Mrs. Boyle the $4,000 as she took up my New York loan, so I only have $960.60 left but am so rejoiced to think I am entirely out of debt now, for which I thank and praise God. He has helped me so wonderfully since Papa died." She sold the lower ranch several months later, though she writes on August 4th, "Mr. Glaser is trying to make me more trouble over the sale...as he wants a commission, and I did not sell it until I took it out of his hands. So I do not know what he will do."

Much of the diary is filled with daily activities of a devout widow -- attending prayer and Bible study groups, weekly Sunday School and church, missionary work, visits the poor and sick. She is also involved with the WCTU and assists the Sisters of Mercy, who ran a hospital and two schools in Durango. She often describes neighbors and acquaintances as "Brother" or "Sister" in the diary, presumably members of her church or prayer group. She often writes of her strong desire for a higher purpose and for work in a cause that is fulfilling and worthwhile:

"...while I was still sewing Brother Cox & Miss Weekly walked in. I was so surprised. They just got back from the Conference. ... Brother Allen and Greg also came in to see Mrs. Boyle as she promised to help start a mission in Denver...and will go out to Vallecito in the morning and wants Miss Weekly and me to go along. ... Miss Weekly left for Farmington this morning and Brother Allen & Greg left for Denver. Brother Allen says he will pray about my getting into mission work there as I have had a great desire to do mission work of some kind, either in a children's home or regular mission. ... Durango is such an indifferent town to work in, and I have such a desire to do work that will count for God, but He knows all about it. The conference endorsed a mission in Denver and Brother Allen will start one right away."

Overall, this is a wonderful record of one woman's daily life in small-town Colorado during the late 1910s, with numerous details of persons and activities. (Inventory #: 1692)
$575.00 add to cart or Buy Direct from
McBride Rare Books
Share this item