[Archive of Letters from Farmer George Brown to His Managing Agent, Jasper Clark, in North Dakota] 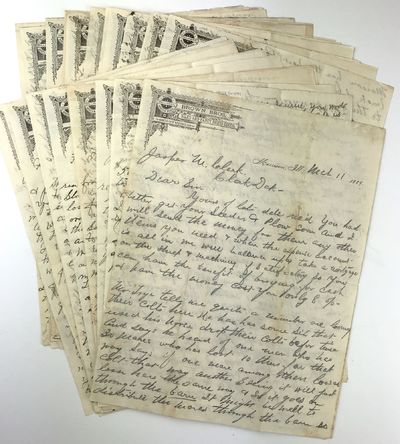 by Brown, George
Morrison, Ill, 1892. Very good.. Twenty-three letters, [48]pp. total. Folio sheets. Old fold lines, minor scattered soiling and wear. In a legible hand. An archive of correspondence between an Illinois sheep farmer and his South Dakota-based farm manager detailing business over the course of several years. George Brown, based in Morrison, Illinois, writes here to Jasper Clark of Clark, [South] Dakota, where Clark appears to be the manager or partner for another sheep ranch owned by Brown, possibly a relation of some sort. Clark, South Dakota is located in the northeast quadrant of the state, not near much of anything. In addition to sheep, the farm in South Dakota raised oats and corn for the livestock, as well as some horse breeding. All but three of the letters date to the first seven months of 1889, providing a detailed glimpse of the Dakota operation.

The first letter is dated January 18th, and seems to be early in the establishment of the operation out west. Brown writes with a flurry of questions, asking for details about the stock, the horses, and everything else: "Not having heard from you for some time have on the old theory that, no news is good news, concluded that everything must be working all right. How is the water supply, and how are the colts, yearlings also the bay 3 yr old with the swelled hock joint. Also the other mares, and how does Marlow flourish, in fact I guess I would like to hear from you in regard to the cattle & sheep which constitutes all the stock." He asks after grain usage during the winter, and suggests ordering a carload of corn from Iowa in conjunction with their neighbors to get a better rate.

In February there is a lengthy discussion about buying a plow, and the advantages of the riding plow versus the walking version for the price. In March, Brown writes about improvements to the property: "Now Jasper if can get along all right with a summer kitchen instead of an upright for a year or so I would like it as I would like to have the crops pay for the improvements from this if can. However I will write Father & see what he thinks best & what an upright would cost me, &c." He also writes in May about fires in the area:

"Friend Jasper, Since writing you have been reading the Clark Pilot of the numerous fires. Strange about Fred Steeres fire and a heavy loss. I think many of these fires on that order are caused by using these parlour [matches] that have large heads by being dropped and something steps on it & away it goes. We don't have them around our house at all we use the old fashioned small head match. Then fire like Frank Austins caused by a spark lighting in some bunch of hay straw or dead grass with the high winds you have there it will need extra caution to guard against these different ways for fire to clean us out. I think you are careful and watchful."

In a letter dated June 27, 1889, Brown encloses money for expenses and discusses the wool clip from the farm in Dakota, writing: "Enclosed find draft for $50.00 dollars to pay for corn bought, tools for paring horses hoofs, &c. wool twine &c. I think if your wool is good quality you had better send to W.A. Allen & Co. [in] Chicago for sacks & ship there. If can sell the poor lot you sheared at home do so. Parties here shipped yesterday to Allen. They expect to get 24 cents clear after paying frt. & commission." He also discusses the sale of two mares, writing that Clark should do as he thinks best, "But the blind mare would probably be all right another year & the grey has raised two good colts in succession & may do all right another year. The large blind mare bred ought to bring $55 or $60, I should think."

A good look at farming life in the Dakotas. (Inventory #: 1657)
$950.00 add to cart or Buy Direct from
McBride Rare Books
Share this item

[Autograph Letter, Signed, to Isaac Toucey Regarding the Presence of American Gold in the Congo During the Still "Flourishing" Slave Trade in Africa]

Washington, D.C. : April 20 , 1857
(click for more details about [Autograph Letter, Signed, to Isaac Toucey Regarding the Presence of American Gold in the Congo During the Still "Flourishing" Slave Trade in Africa])
View all from this seller>