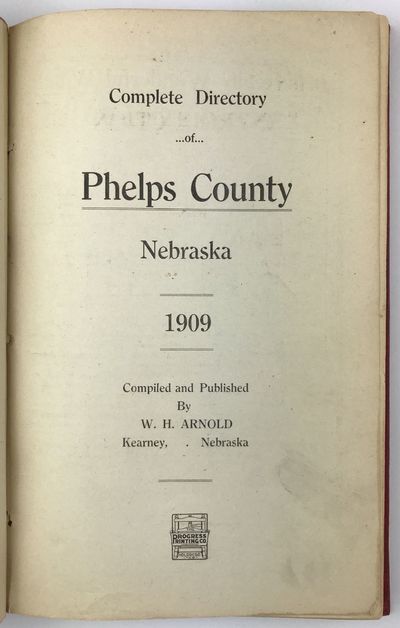 by [Nebraska]
Kearney: W.H. Arnold, 1909. Good plus.. 186,iv,[1]pp. plus seven plates of ads and six maps (two folding). Original red cloth covers, stamped in black; sympathetically rebound with covers and front endpaper laid down. Original cloth lightly soiled and faded. Light soiling and wear to contents, a few leaves creased. Extensive manuscript notations throughout, likely contemporary. Large folding map, 25.5 x 24 inches, separated and laid in; lower third of map separated along much of the lower fold, some light dampstaining and soiling at edge. A scarce directory for Phelps County, Nebraska, located in the south central part of the state, near Kearney. The directory is divided by town, beginning with the rural residents and moving on to Holdredge, the largest town in the county. Sections are demarcated by a plate of ads (printed on red paper) and a map of the town. The map for Holdredge is a double-page spread, folded, while maps for other towns are single pages. In addition to residents, there are additional listings for businesses, as well as churches and lodges, together with a brief history of the town. Other towns included are Bertrand, Loomis, Atlanta, and Funk. The large folding map, which in this copy is laid in, is titled, "Map of 1908 Phelps County Nebraska by P.O. Billing, Holdredge, Neb." Printed in color, it shows the northern boundary of the county as the Platte River, and is quite detailed, showing mail routes, and each township divided into plats labeled by owner. Small pictographs of churches and houses dot the landscape. Rivers, railroads, and school districts are all noted.A previous owner has made numerous annotations to the text, which include indecipherable check marks and circles to the left of some names, but also notations of relocations (such as moving to Holdredge from the rural areas, or moving to another state entirely), added names, and a startlingly large swathe of folks marked as "dead" in the right margin. The final three blank pages are also full of additional names and associated cities. An interesting trove of local information for someone to decipher. Five copies located in OCLC, at Yale, Library of Congress, the Newberry, University of South Dakota, and the Allen County Public Library in Indiana. (Inventory #: 1653)
$450.00 add to cart or Buy Direct from
McBride Rare Books
Share this item

[Autograph Letter, Signed, to Isaac Toucey Regarding the Presence of American Gold in the Congo During the Still "Flourishing" Slave Trade in Africa]

Washington, D.C. : April 20 , 1857
(click for more details about [Autograph Letter, Signed, to Isaac Toucey Regarding the Presence of American Gold in the Congo During the Still "Flourishing" Slave Trade in Africa])
View all from this seller>