Art For Everyone: Contemporary Lithographs Ltd 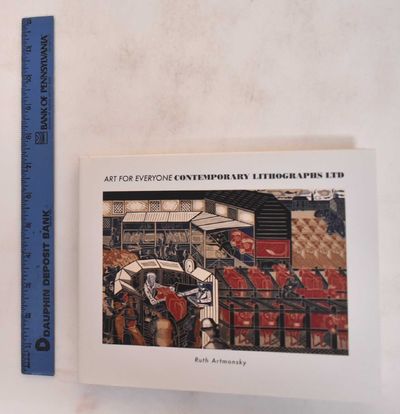 by Artmonsky, Ruth
Suffolk, England: Antique Collectors' Club, 2010. Hardcover. Near Fine. (light wear to covers, corners & spine edges. interior clean & bright. dustjacket as light scuffs). oblong white boards w/ color illustration. 118 pgs w/ color & bw illustration. white dustjacket w/ cover illustration. "Contemporary Lithographs was a pioneering scheme set up by Robert Wellington, who had helped make Zwemmer's the centre for modern art in the 1930s, and the artist John Piper. Their inspiration was to take good quality prints into schools across Britain. Together they commissioned and produced two series of prints, with in some cases Piper taking on the task of coaching artists who were not familiar with the auto-lithography process. They involved many of the Zwemmer artists, as well as their own friends: Edward Bawden, the Nash brothers, Eric Ravilious, Graham Sutherland and John Piper himself." "This beautifully produced book reproduces all the works for the first time and traces the scheme from its ambitious beginnings to its closure at the start of WWII. With its companion, The School Prints, it will appeal to anyone interested in Modern British Art and sit perfectly alongside several titles in the ACC Design series."--Jacket. (Inventory #: 181922)
$30.00 add to cart or Buy Direct from Mullen Books
Share this item