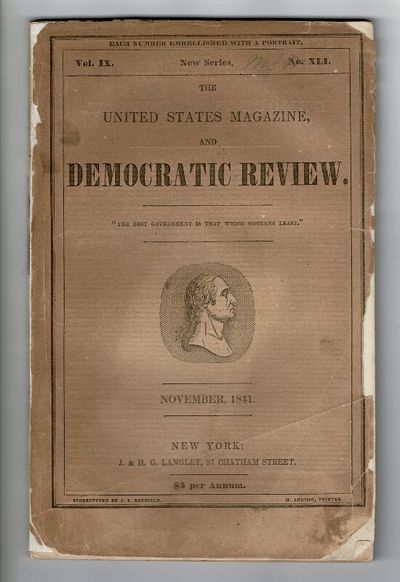 by Whitman, Walt
New York: J. &. H. G. Langley, November, 1841. First edition of this story, 8vo, pp. [3], 412-512; engraved portrait frontispiece of Martin Van Buren; original printed front wrapper, lower wrapper and spine perished, upper wrapper chipped and reattached, light foxing to edges, good. The first appearance of Whitman's short story "Wild Frank's Return," which occupies pp. 476-482 of the issue. "Wild Frank's Return" is the second of nine short stories that Whitman contributed to the Democratic Review early in his career. In the footnotes of this issue Whitman claims that the events of the story are based on historical fact. It reappeared in a few other periodicals, and was later published in a revised version in Whitman's Specimen days. Myerson E30. (Inventory #: 57823)
$201.25 add to cart or Buy Direct from
rulon-miller books
Share this item