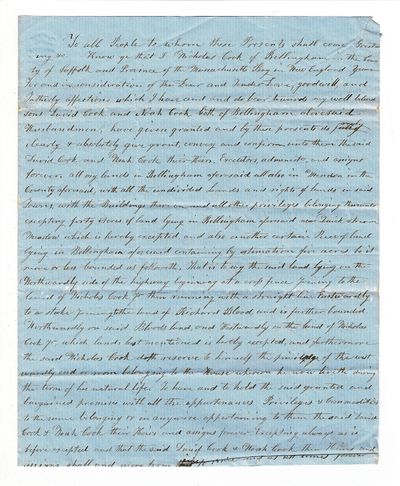 by [Thayer, Preserved Smith]
[Worcester, MA, 1868. A small collection of material concerning the ownership, surveying, and exchange of land in Massachusetts, largely around the Millville area. All in very good condition except as noted. The collection was in the possession of Preserved Smith Thayer, a textile merchant, Justice of the Peace, postmaster, and landlord. The documents either concern his direct interests or came into his possession in the course of his duty as Justice of the Peace. Included are: A pro forma deed, accomplished in manuscript selling Uranah Thayer (Preserved's mother) "one undivided half or moiety of three certain tracts or pieces of land... situated in the southern part of Mendon, Massachusetts" Signed by Preserved S. Thayer. The boundaries are described in detail and total approx. 8 acres. The deed is dated 1838. On verso is a manuscript statement dated 1849 and signed by Uranah stating that the property has been resold to Preserved. Some tears along folds but with no loss. Manuscript deed from Uranah to Preserved concerning property in Millville, dated 1845. Three documents concerning probate. One manuscript letter from Samuel Smith of Worcester apologizing for tardiness in inspecting a will as requested. One pro forma letter from the probate court of Worcester appointing Thayer administrator of the estate of John Dorgen, and one 2-p manuscript copy of the will of Nicolas Cook of Bellingham, with note from Arthur Cook identifying property and relations of the family. Pro-forma insurance policy, accomplished in manuscript and dated 1852, for William P Eveleth of New Gloucester, for "a house two stories about 36 by 32 feet" a barn, and 70 acres of a farm. Manuscript lease between Edward. S. Hall, and Thayer, for property in Millville, dated 1856. A letter from the Depot Quarter-Master's Office of DC on letterhead, forwarding the effects of the late C. A. Buffum, dated 1862. Copies of two property inventories of P. S. Thayer, listing "all my estate, both real and personal not exempt from taxation." Dated 1862 and 1864. Between those two years he adds a tailor's shop, wall house, barn and office, loses three cows, and maintains 7/8 acres of land, an old house ("not worth much") and one third of a parsonage house. Two manuscript surveyor's orders, to William P. Eveleth dated 1854 and 1868, describing the area in New Gloucester for which he is to be responsible. (Inventory #: 57886)
$143.75 add to cart or Buy Direct from
rulon-miller books
Share this item

Beating a dead horse, the life and times of Jay Marshall

New York : Junto Publishing , 2010
(click for more details about Beating a dead horse, the life and times of Jay Marshall)
View all from this seller>