The truth, the whole truth, and nothing but the truth. Addressed to the Rev. Cave Jones; and recommended to the consideration of all whom it may concern 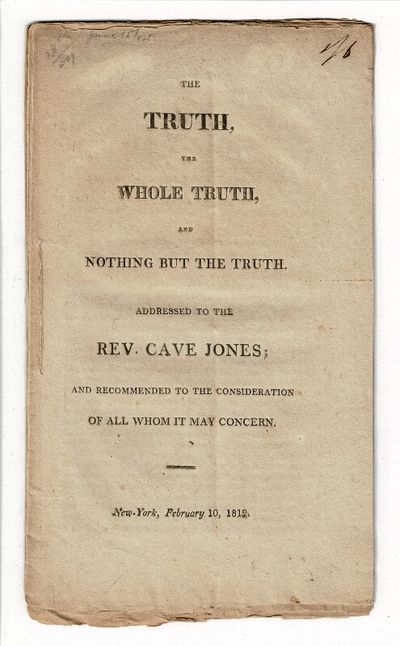 by [Hobart, John Henry.]
New York, 1812. First edition, 8vo, pp. [3], 4-22, [2] ads; self-wrappers, stitched, as issued; very good. An installment in the 1811-1813 pamphlet war between Rev. Cave Jones and John Henry Hobart. The dispute was grounded in a petty rivalry over advancement within the Episcopal Church of New York, with interpersonal conflict often disguised as theological disagreement. Eighteen pamphlets in total were published, both sides amassing supporters who sought to influence appointments and elections. Th text is signed "Ignatius" on p. 21. American Imprints 26922. (Inventory #: 57810)
$132.25 add to cart or Buy Direct from
rulon-miller books
Share this item