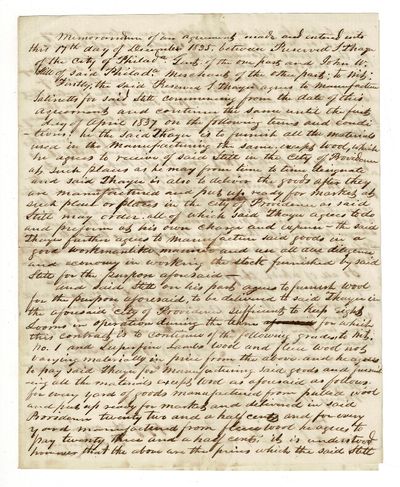 by Thayer, Preserved S.
[Millville, Providence, et al., 1845. Forty-nine letters, notes, receipts and other manuscript documents from the records of Preserved S. Thayer, a businessman, Justice of the Peace, Postmaster, and landlord in Millville, Mass. The documents primarily concern a business venture between Thayer; John Still of Philadelphia, who was to provide raw material in return for wool and satinetts; and Baker & Benson, who managed the mill in Providence R.I. where the material was to be processed. Poor quality control resulted in a significant amount of the finished product being defective, and led to a lawsuit between Thayer and B&B. Thayer married Stephen Sibley Benson's sister Susan Angenette Benson in 1830, but he appears to have divorced and married Louisa Georgiana Wall, the daughter of associate George Wall in 1835. The business difficulty appears to have started in 1836. Whether or not the divorce and the businesses falling-out were related, is unclear, but Thayer appears to have at one point been in conflict with the entire Benson family. Included in the collection are: A copy of a memorandum of an agreement between Thayer and Still to initiate the business. Letters from Baker and Benson to Still and Thayer requesting payment for expenses and more raw materials to maintain production. "We wrote to you that we were most out of wool for milling wish you would see that there is some sent forthwith." A shipping manifest for "Case #10 from the mill with request for payment." and bills of expenses, one with a penciled note by Thayer contesting the total. A duplicate of the B&B account etc. sent to Worcester to be filed in settlement, with complaints and disputes on bills concerning quality of the product including "a deficiency in the 8000 yards" Letters and filings on the subsequent suit. In a letter describing damages Thayer writes: "I would say there was a loss sustained of $15.24 on 204 yds of Satinetts in consequence of their not being scoured clean. There were 2008 ¼ yards of drab satinetts which were extremely bad colours..." He refers to a Millville company's goods which are of comparatively superior quality. 8 pages of manuscript examination and cross-examination questions. 4-page copy of a statement from Thayer to what appears to be his lawyer, a Mr. Merrick, in pencil. A 2-p list of textile products produced or damaged, includes Silk prints, Shirting, Cotton, Linen, Edging, etc. A note in pencil "The first price of goods on the bill was priced when it was laid out at 11c and the price marked on the ticket the deduction of 2c paid was for its being damaged and upon examination int proved to be more damaged than was expected besides it was quite tender all through so much so that we sold it at 10 &12c per yd. They ought to deduct $1 on the price." 1p letter from Aaron White announcing a judgement of $1000 in Thayer's favor. A few items with damage affecting the occasional lines, most clean and very good, of broadly acceptable legibility. (Inventory #: 57861)
$460.00 add to cart or Buy Direct from
rulon-miller books
Share this item

Tangled up in tapes. The recordings of Bob Dylan. Third edition

Sao Paulo : IGLU Editora , 1992
(click for more details about Bob Dylan a estrada revisitada)
View all from this seller>