A Million and One Nights: A History of the Motion Picture 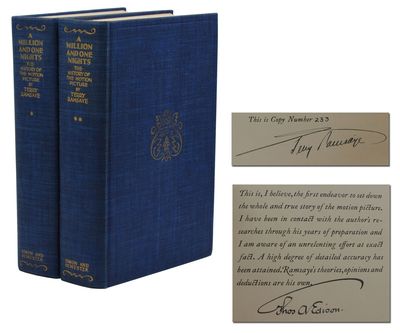 by Ramsaye, Terry; Thomas Alva Edison [Contributor]
New York: Simon and Schuster, 1926. Signed Limited First Edition. Near Fine. First edition. Copy number 233 of a limited 327, signed by Ramsaye and Thomas A. Edison. Large paper copy, bound in publisher's original blue cloth ruled in blind and stamped in gilt; copies of this limited edition were also bound in half-leather. Near Fine with light rubbing. Browning to endsheets. The first official history of the motion picture as written by film journalism Terry Ramsey, presenting a clear picture of the early development of film as seen from the Edison camp. A beautiful copy of a set which often turns up much worse for wear. (Inventory #: 140940905)
$6,500.00 add to cart or Buy Direct from
Burnside Rare Books
Share this item
Burnside Rare Books
Offered by

Self: A Study in Ethics and Endocrinology

London : William Heinemann Ltd , 1946
(click for more details about Self: A Study in Ethics and Endocrinology)

The Hero with a Thousand Faces

New York : Pantheon Books , 1949
(click for more details about The Hero with a Thousand Faces)
View all from this seller>