WINGS OF MAN: THE LEGEND OF CAPTAIN DICK MERRILL 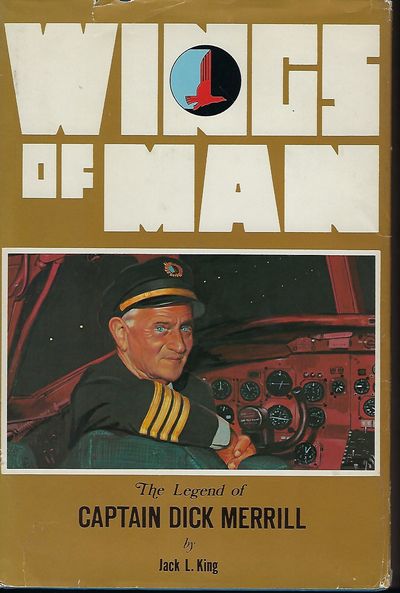 by KING, Jack L.
Glendale, CA/Baltimore, MD: Aviation Book Company/Jack L. King Associates, 1981. First Edition. Signed presentation from King on the front endpaper: "To Captain Charles R. Musick-Dick and I both extend our Very Best Personal Regards, Jack L. King. 10-20-81." Henry Tyndall "Dick" Merrill [1894-1982] was an early aviation pioneer. Among his feats he was the highest paid air mail pilot, flew the first round-trip transatlantic flight in 1936, was Dwight D. Eisenhower's personal pilot during the 1952 presidential elections, set several speed records, and would go on to be Eastern Air Lines' most experienced pilot with over 36,000 hours until his retirement in 1961. In total, Merrill flew over 45,000 hours as pilot in command, covering over eight million miles. Jack is an aviation writer and founded Professional Pilot Magazine in 1967. He also has logged in 20,000 hours as a transport pilot. The intrigue with this particular book is that Capt. Charles R. Musick was a famous pilot and aviator who died in 1938. Also comes with a small square insert from Merrill sending his regrets for not being able to autographed each book personally and then there is a facsimile (not real) signed inscription at the bottom. Also inscribed "To Captain C.R. "Chuck Musick" by King at the top. Merrill died in 1982. Also laid in is a typed letter signed from King, addressed to "Captain "Chuck" Musick." You will have to figure it out (maybe a relative). 8vo., blue cloth in dust jacket; 404 pages. Illustrated.. Very Good (covers nice; contents clean & tight); little wear (small tears & nicks) d/j. (Inventory #: 57307)
$75.00 add to cart or Buy Direct from Antic Hay Books
Share this item
Antic Hay Books
Offered by

THE ISLAND STEAMERS: A CHRONOLOGY OF STEAM TRANSPORTATION TO ND FROM THE OFFSHORE ISLANDS OF MARTHA'S VINYARD AND MANTUCKET

Nantucket, Mass. : Nantucket Nautical Publishers , 1977
(click for more details about THE ISLAND STEAMERS: A CHRONOLOGY OF STEAM TRANSPORTATION TO ND FROM THE OFFSHORE ISLANDS OF MARTHA'S VINYARD AND MANTUCKET)
View all from this seller>