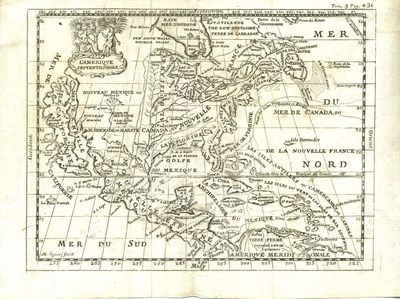 by America , 1690s Map
Two Beautiful 17th Century map of North America and South America. Each about 8 x 6", Dated 1690, two truly historic beautifully detailed very early maps. One is titled "L'AMERIQUE Septentrionale." in a cartoushe with a woman with sword and man. The other one "L'AMERIQUE MERIDIONALE." in a cartouche with two indigenous Indians holding arrow and the tomahawk, palm trees in the back. Both engraved by "M. Ogier", in French. What makes these 2 maps fascinating are the erroneous geographical knowledge of the 17th Century. North America and Canada are on the first map titled "L'AMERIQUE Septentrionale". Greenland touching Canada on top and California is depicted as a large island in the West, upper tip of the California Islands is higher than Lake Erie or New York. Since the map predates Lewis and Clark by over 100 years, it is missing Utah's Great lake, and has disproportionately smaller western United States. The North West is basically blank. Florida's tip bends inward toward the Golf. A truly fascinating Map.

Also included is a separate 1690 map of Map of South America from the same Atlas by "M. Ogier", Titled "L'AMERIQUE MERIDIONALE." in an attractive cartoushe with two Indigenous Indians. Here errors include the absence of the Andes. The formation of South America itself is somewhat flattened and shorter, significantly reduced is the southern tip of South America. Two great 1690 maps of the Americas. Both maps are in excellent condition. (Inventory #: 10220)
$500.00 add to cart Available from
Share this item
Max Rambod Inc.
Offered by