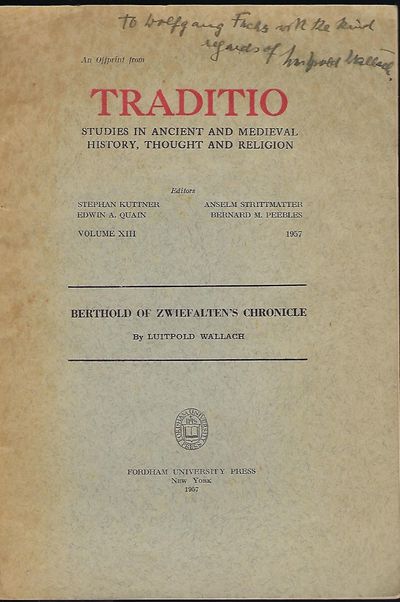 by WALLACH, Luitpold
NY: Fordham University Press, 1957. First Edition. Signed presentation from Wallach on the title page: "To Wolfgang Fuchs with the kind regards of Luitpold Wallach." Wallach was an American Classics educator and author. He was imprisoned by the Nazis and sent to Dachau in 1938 but strenuous efforts by friends and his sister Sally, who was residing in New York, procured his release from Dachau in 1939. He left Germany and crossed into France, eventually making his way to the United States. In 1967, the University of Illinois offered him a full professorship in classics and medieval studies, with a joint appointment in history. He was also appointed Doctor of Philosophy at Cornell University. Possibly inscribed to Wolfgang Fuchs, who played an important role in helping people flee from East to West Berlin after the Berlin Wall was built in 1961. Small quarto, gray printed wraps; 96 pages. An Offprint from "Traditio," Studies In Ancient And Medieval History, Thought And Religion.. Very Good (little cracking base of spine, minor wear & browning; contents clean & tight). (Inventory #: 57320)
$50.00 add to cart or Buy Direct from Antic Hay Books
Share this item
Antic Hay Books
Offered by