So Rugged and Mountainous: Blazing the Trails to Oregon and California, 1812-1848 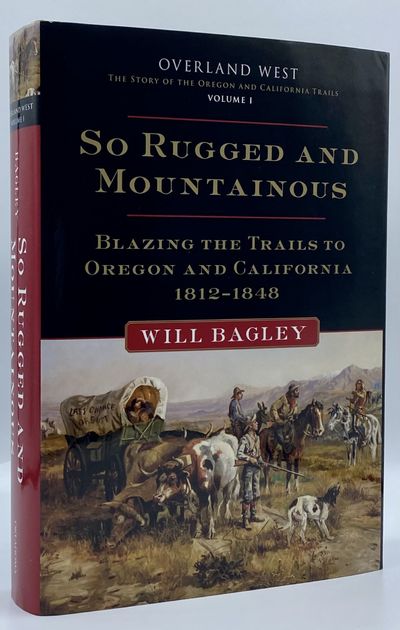 by Bagley, Will
Norman: Arthur H. Clark Company, 2010. First Edition. 458pp. Quarto [26 cm] Tan cloth with the title stamped in black on the backstrip. Fine/Fine. Signed by the author on the half-title.

The story of America's westward migration is a powerful blend of fact and fable. Over the course of three decades, almost a million eager fortune-hunters, pioneers, and visionaries transformed the face of a continent—and displaced its previous inhabitants. The people who made the long and perilous journey over the Oregon and California trails drove this swift and astonishing change. In this magisterial volume, Will Bagley tells why and how this massive emigration began.

While many previous authors have told parts of this story, Bagley has recast it in its entirety for modern readers. Drawing on research he conducted for the National Park Service's Long Distance Trails Office, he has woven a wealth of primary sources—personal letters and journals, government documents, newspaper reports, and folk accounts—into a compelling narrative that reinterprets the first years of overland migration. (Inventory #: 4706)
$25.00 add to cart Available from
Tschanz Rare Books
Share this item

The Message of the Joseph Smith Papyri: An Egyptian Endowment

A Winter with the Mormons: The 1852 Letters of Jotham Goodell

Salt Lake City : Tanner Trust Fund / J. Willard Marriott Library, University of Utah , 2001
(click for more details about A Winter with the Mormons: The 1852 Letters of Jotham Goodell)
View all from this seller>