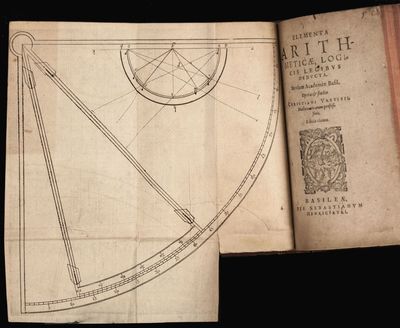 Very rare first and only edition of the mathematician Pierre Vernier's (1580-1637) landmark work introducing his invention of an ingenious new scale – here illustrated with a fold-out engraving – designed to greatly increase the accuracy of mensuration instruments. The scarcity of this treatise belies its broad impact on many categories of scientific instrumentation, including astronomical quadrants, calipers and micrometers, navigational sextants, and surveying theodolites, with several of these categories today still regularly relying on the so-called 'vernier scale'. A device "indispensable to all refined measurement" (E. R. Kiely, p. 176), the vernier scale ranks among the great achievements in precision instrumentation which propelled the Scientific Revolution in the 17th century and beyond.

Vernier's innovation was to add a short auxiliary scale which slides along the divisions of a standard graduated instrument, thereby allowing a viewer to take readings which fall between two graduation markings with much greater precision than could be achieved by simple estimation. Vernier states that his instrument – a quadrant with an attached vernier scale – was designed "for the perfection of the mathematical sciences, principally for observing the movements of the heavens, determining longitude and latitude, and in land surveying" (fol. A1r). An improvement on a concept proposed by Christopher Clavius (1538-12) in his Geometrica practica (1604), Vernier's device as described in the present treatise of 1631 could achieve an angular sensitivity of better than one third of a minute of arc: "By 1760 further refinements such as the use of a magnifying glass to view the vernier improved the precision on large quadrants to ½ second. Linear scales achieved a similar degree of precision" (J. J. Roche, pp. 57-8).
The name 'vernier', now widely applied to the small movable scale attached to a caliper, sextant, barometer, or other graduated instrument, was given by the astronomer Jérôme Lalande (1732-1807). Lalande showed that the name 'nonius', after Pedro Nunes (1502-78), which was customarily used to describe Vernier's invention during the 17th and 18th centuries, belonged more properly to a different contrivance. The name 'nonius' continued to be misapplied to the vernier even into the 19th century. Vernier does, however, give credit here to both Clavius and Nunes for inspiring his invention (p.l. 3v), and he additionally notes how his instrument would allow astronomers to improve upon Tycho Brahe's method of reading arcs and circles (p.l. 3v; H. C. King, p. 94).
Vernier's La construction, l'usage, et les proprietez du quadrant nouveau de mathématique is a rather unusual example of a scientific book – especially one of such importance – published in the Low Countries during the period of Hapsburg rule, a time of relatively little independent scientific or technological work in Belgium. The present work affords an important exception. Vernier worked as a military engineer for the Spanish Hapsburgs, the rulers of his native Franche-Comté. In his dedication, Vernier writes that he presented the new instrument to the Infanta of Spain and Portugal, Isabelle-Claire-Eugénie (1566-1633) in Brussels in 1630, who encouraged him to describe it in the present book. The treatise also contains a trigonometry table for sines and a method for deriving the angles of a triangle from known measurements of its sides, both of which are helpful in using the vernier-scale quadrant.
Bound with Vernier's work in the present volume is the 1602 edition (first in 1579) of the mathematician Christian Wurstisen's (also 'Urstisius') (1544-1588) Elementa arithmeticae, logicis legibus deducta, a popular practical treatment of proportion, especially the 'rule of three', and the application of this rule to commercial problems, as well as square and cube roots.
OCLC locates U.S. examples of Vernier's La construction, l'usage, et les proprietez du quadrant nouveau de mathématique at the New York Public Library and Emory. No copies of the 1602 edition of Wurstisen's Elementa arithmeticae, logicis legibus deducta are recorded in the U.S.
* Tomash and Williams ADD 45 & 50; STCV 6830631; USTC 1004804; VD17 32:632759C; E. R. Kiely, Surveying Instruments: Their Histroy; J. J. Roche, The Mathematics of Measurement: A Critical History; H. C. King, The History of the Telescope. (Inventory #: 5776)
$6,500.00 add to cart Available from Martayan Lan
Share this item
Martayan Lan, Inc.
Offered by