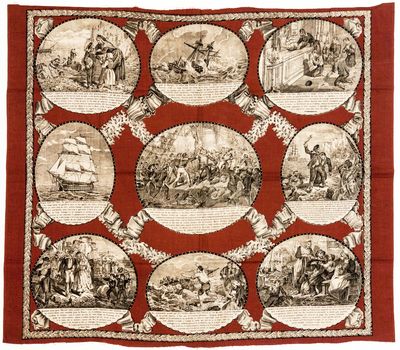 Highly attractive and unusual mid-19th-century printed textile illustrating an archetypal story of the ideal French mariner, a fisherman's son named Jacques, who left home as a boy to sail to the Antilles with the merchant marines, met with many adventures on the high seas (shipwreck, pitched battle on deck, encounters with natives), and years later returned home to raise his children to follow his example of maritime heroism.
Such printed handkerchiefs, a specialty of Rouen most notably associated with the shop of the engraver/printer Narcisse-Alexandre Buquet (1825-94), formed a category of popular imagery in which a textile was printed with an engraved plate and sometimes (as here) enriched with woodblock color. The ephemeral "mouchoir illustré rouennais" depicted a broad range of scenes taken from daily life, contemporary domestic and foreign politics, and even served as practical technical reminders for servicemen (known as "mouchoirs d'instruction militaire"). These highly perishable items are all today very rare, with many examples known only from archival proofs printed on paper (see Bassargette for an introduction to the mouchoir illustré rouennais).
The present handkerchief is particularly lively, illustrating the life of the seaman Jacques in 9 rather romantic scenes, each of which is provided with an extensive caption. The story seems to harken back to a nostalgia for French maritime exploits during the Napoleonic Wars, and while some details seem drawn from history and popular periodical literature, the tale was apparently invented specifically for this piece. The scenes, read from left to right, can be summarized as follows: (1) Jacques, the eldest son of a fisherman's widow, in order to support his family signs on with the merchant ship Sainte-Adelaïde, sailing for the Antilles. (2) In the Gulf of Mexico, the ship is caught in a storm and springs a leak. The crew promises to make a pilgrimage to Our Lady of Mercy if they are saved. Jacques plunges into the hold and plugs the leak. (3) In port the crew fulfill their pilgrimage vow. Sailors place an ex voto of a ship on the church altar. (4) Jacques signs on with the battleship Hercules, where he is bullied by the "old sea wolf" named Lartigot, but he eventually wins the admiration of the crew. (5) A heavily armed enemy vessel attacks the Hercules. Grappling irons are thrown, the bugle blows, the enemy vessel is boarded, and Jacques, hatchet in hand, saves the surrounded Lartigot. (6) Now in the Pacific, the Hercules anchors at the Navigator Islands (Samoa). A party goes ashore in search of water and encounters natives eager to trade. The lieutenant is injured in a melee, but Jacques saves him. (7). The Hercules sails for France, and back home Jacques is decorated for his bravery, is promoted, marries Lartigot's beautiful daughter, and settles down in St. Malo. (8) One day a ship founders off the coast of St. Malo. Jacques hears the alarm, and, rope tied around his waist, he swims into the sea and saves eight sailors. (9) Jacques is given the nickname "Va-de-bon-coeur" in recognition of his eager courageousness, is appointed head of the coast guard, and is given a seaside house, where he raises his children to follow in his footsteps.
*E. Bassargette, "Une imagerie éducative: Le mouchoir illustré rouennais," Histoire de l'education, vol. 30 (1986), pp. 61-66. (Inventory #: 5794)
$4,500.00 add to cart Available from Martayan Lan
Share this item
Martayan Lan, Inc.
Offered by