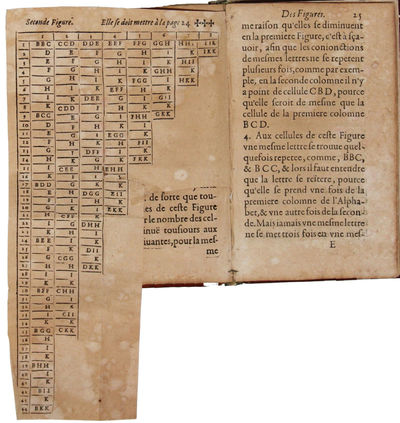 Rare first French edition (first Latin 1618) of this pocket summary of the Lullian art for lawyers, by the Italian born Aristotelian and legal theorist Giulio Pace. Hillgarth groups Pace's introduction with that of another jurist, Pierre Grégoire, as being exceptional among 17th century interpreters of Lull: both avoid digressions into alchemy, cabalism and magic, and stick more closely to Lull's traditional interests in argumentation (Ramon Lull and Lullism, p. 294); hence its application to legal argumentation. While Lull's teachings took on a life of their own—and one speaks of Lullism as a philosophical method and doctrine with a self-contained history--, the origin for a system of argumentation lay in a project of messianic evangelization. "The Art can be understood correctly only when viewed in the light of Lull's primary aim: to place Christian apologetics on a rational basis for use in disputations with Muslims, for whom arguments of "octroi"grounded on the Old Testament—widely used by Dominicans in disputations with the Jews—carried no weight." Pring-Mill in DSB VIII.548.

Pace was born in Vicenza in 1530 and studied law and philosophy in Padua. Deeply affected by the Reformation, he eventually moved to Geneva and became a Protestant. According to Schmidt (Aristotle and the Renaissance 43), his edition of the Organon became standard during its shelf-life of 11 editions (1584-1623)—and in the north. He also wrote a great many legal titles. In addition to the introduction to Lull, he performed a similar service for Ramus.
OCLC lists a single U.S. copy of this French edition: Wisconsin. The Latin is held by Berkeley Law, Chicago and the Newberry. (Inventory #: 2936)
$2,450.00 add to cart Available from Martayan Lan
Share this item
Martayan Lan, Inc.
Offered by