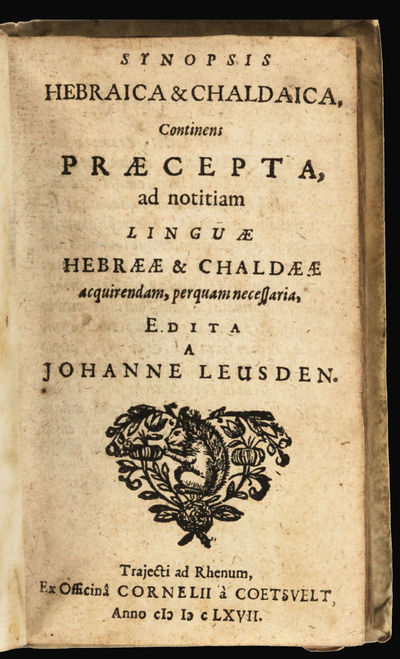 
Rare first edition of a Hebrew/Latin/Dutch pocket-lexicon, compiled by Johannes Leusden, a follower of the famous philologist and Christian Hebraist Johannes Buxtorf (1564-1629), who chaired Hebrew studies at Basel for over thirty years. The volume is comprised of four parts, with Leusden's two philological works preceded by a supplement. The supplement to his second work—a bilingual transcription of Masoretic verses—is authored by Antonius Hulsius, Leusden's colleague at the University of Utrecht.
The volume's first work, a pocket-lexicon of Hebrew and Aramaic words that appear in the Masoretic OT, takes its title directly from Buxtorf's earlier Manuale hebraicum, a similar lexicon. It is preceded by a grammar, laying out rules for conjugation and declension and identifying variants in spelling and pronunciation. Leusden acknowledges in his foreword that the work also aims to revive the popular Dutch/Hebrew grammar of Sixtinus Amama (1593-1659), and that its publication further coincides with that of his own Biblia hebraica (Amsterdam, 1667). "Leusden's greatest achievement in the field of Hebrew studies was the edition of the Hebrew Bible corrected according to the masoretic annotations, with a completely new lay-out which greatly facilitated study and quotation of the text for Christians and Jews alike, financed and published by the Amsterdam Sephardic printer Joseph Athias in 1667" (Offenberg).
The second of Leusden's works provides selected verses from the OT with Latin transcriptions on the verso of each leaf. The work reflects a number of important philological innovations or controversies that the author participated in during his career: e.g. the numeration of the Hebrew verses, which first appeared with Leusden's 1667 Bible. Leusden also prints the vocalization-signs to Hebrew words, hearkening to the position he took up in 1656 (alongside Buxtorf, and against the Huguenot theologian Louis Cappel) that the accents were integral to the language—created not by later rabbinic literature but by God. Even more controversially, Leusden also transcribes the Hebrew Tetragrammaton into the Latin word Jehova, a choice that had been stridently opposed by virtually all of his predecessors, including Amama, Cappel, John Drusius and Buxtorf himself.
Johann Leusden (1624-1699), a Christian Hebraist, taught Greek and Hebrew at the University of Utrecht. He composed a number of works on Hebrew, Greek and Latin philology.
OCLC:
1&2: UMass Amherst, Boston College, Case Western. 1 only: Indiana, Emory. 1683 edition: Columbia, Yale, LOC, Harvard. 3: No 1673 copies located. (Multiple copies of 1674, 1685, 1694, 1704.) 4: No 1673 copies located. (Multiple copies of 1674, 1679, 1683.)*Zwiep & Offenberg, Omnia in Eo (Bibliotheca Rosenthalia), p. 259. (Inventory #: 4472)
$2,450.00 add to cart Available from Martayan Lan
Share this item
Martayan Lan, Inc.
Offered by