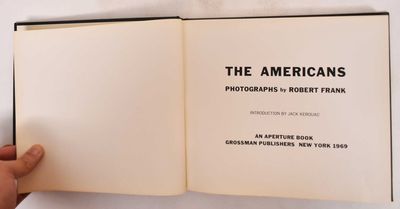 by Frank, Robert and Kerouac, Jack
New York: Aperture, Grossman Publishers, 1969. Hardcover. VG- overall light shelfewar to boards and corners, VG inside. Clean, tight, crisp corners and very little wear.. Black cloth boards with gilt lettering on spine. Unpaginated. Mainly comprised of BW photographs. First published in France in 1958, then in the United States in 1959, Robert Frank's The Americans changed the course of twentieth-century photography. In 83 photographs, Frank looked beneath the surface of American life to reveal a people plagued by racism, ill-served by their politicians and rendered numb by a rapidly expanding culture of consumption. Yet he also found novel areas of beauty in simple, overlooked corners of American life. And it was not just Frank's subject matter--cars, jukeboxes and even the road itself that redefined the icons of America; it was also his seemingly intuitive, immediate, off-kilter style, as well as his method of brilliantly linking his photographs together thematically, conceptually, formally and linguistically, that made The Americans so innovative. -Website description. (Inventory #: 182188)
$250.00 add to cart or Buy Direct from Mullen Books
Share this item